From Cvillepedia
Revision as of 13:36, 6 May 2022 by Seantubbs (talk | contribs) (+defunct (could use some whittling))
(diff) ← Older revision | Latest revision (diff) | Newer revision → (diff)
Jump to: navigation, search 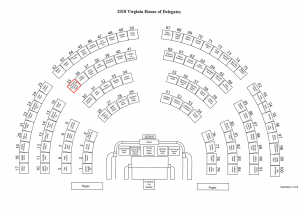 The 57th Virginia House of Representatives District encompasses all of Charlottesville and parts of Albemarle County east of the city. Delegate Sally Hudson was elected to her first term in November 2019.

The General Assembly is a bicameral body consisting of a lower house, the Virginia House of Delegates, with 100 members each representing a population of about 80,010 individuals, and an upper house, the Senate of Virginia, with 40 members. Combined together, the General Assembly consists of 140 elected representatives from an equal number of constituent districts across the commonwealth.0

As of the 2010 census, a total population of 80,778 reside within Virginia's fifty-seventh state house district. Virginia's state delegates represent an average of 80,010 residents.[1] 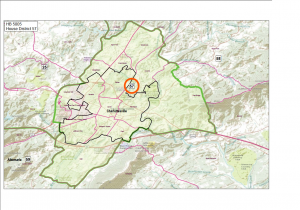 The district encompasses all of Charlottesville and a portions of Albemarle County east and southwest of the city comprised of Agnor-Hurt (104), Branchlands (103), Cale (405), Dunlora (105), Georgetown (203), University Hall (202), and Woodbrook (101) Precincts and parts of the East Ivy (304) and Free Bridge (504) Precincts. The district is primarily suburban.

Elections for the Virginia House of Delegates took place in 2019. The Democratic primary was on June 11, 2019, and the general election was on November 5, 2019. No independents or Republicans ran run.

Sally Hudson and Kathleen Galvin ran in the Democratic primary for Virginia House of Delegates District 57 on June 11, 2019. Hudson won.