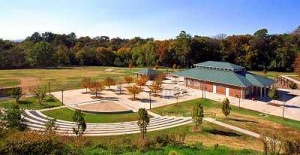 Tonsler Park is located at the corner of Cherry Avenue and Ridge Street in Charlottesville's Fifeville neighborhood. It was created in 1946 to honor Benjamin Tonsler, a prominent figure in the history of African American education[2]. The park was expanded to its present size of 7.4 acres in 1978[3].

The park features lighted tennis courts, a large playground and a recreation center. It is open from 6:00 am to 10:00 pm.

The park contains extensive facilities available for use to the public, including a functioning recreational center, tennis courts, a life-size chess board, lighted basketball courts, a little league field, and playground equipment.[4]

Planning for a playground replacement took place in the early 2010's. Two neighborhood meetings were held at the Tonsler Park Recreation Center on August 30 and September 13, 2011. [5] Parks director Brian Daly had hoped to have the playground replaced by the end of the year,[6] but the project was not completed until October 2012. [7]