Her desegregation efforts began in 1950 when she wrote to Gregory Swanson, welcoming him as the University of Virginia‘s first Black law student. When Swanson was offended by her condescension and disappointed by her belief in gradual desegregation, Boyle began meeting with local African American news editor Thomas Jerome Sellers for advice. Boyle grew more radical after her exchange with Swanson, and began writing letters to the editor and articles advocating for immediate integration.

One such article published in the Saturday Evening Post resulted in local white supremacist groups burning a cross in her yard. Boyle was the first white person to join the Charlottesville NAACP. She also denounced massive resistance in front of the General Assembly. Her 1962 autobiography The Desegregated Heart additionally brought her national attention.

Boyle is one of several people commemorated by the late 20th-century artist Frances Brand as part of her Firsts series.[3] 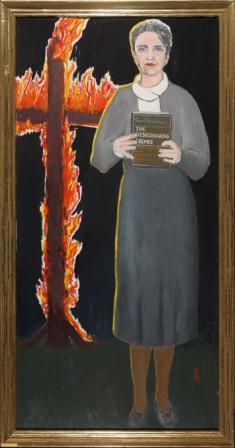