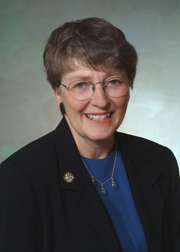 Sally Thomas (I) won election to a fourth term on the Albemarle County Board of Supervisors on November 8, 2005. She ran unopposed. She first won election to the board in 1993 as a write-in candidate, and was also unopposed in 1997 and 2001.

Thomas grew up in a small town in Oregon and has B.A. and M.A.T. degrees from Harvard/Radcliffe in Government and Education. She and her husband, George Thomas, have lived here since 1963, raising two daughters who attended County schools.

Before being elected in a write-in campaign in 1993, Thomas was Director of Governmental and Community Relations at U.Va. Thomas served on the Albemarle County School Board and was president of the local League of Women Voters.

Board liaison with ACE committee

Board of the Lewis and Clark Exploratory Center

Board Liaison for The Mountain Protection Committee