The iconic building of the University of Virginia. 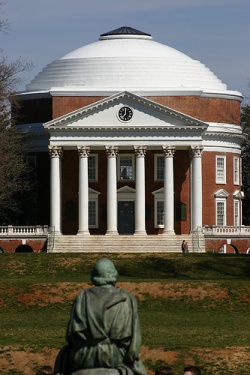 A fire destroyed most of the Rotunda on October 27, 1895.[1] An attempt to save the Rotunda's annex made by Professor William Echols through the use of dynamite resulted in the annex exploding and the fire spreading. The New York architecture firm of McKim, Mead, and White was hired to perform the renovations and Stanford White himself headed the renovations.

In an effort to repair the Rotunda's leaking roof, plans were drafted that required several magnolia trees to be removed in order to facilitate access. Over 1,800 signatures were collected on a petition to stop the Board of Visitors from approving such an action. [2] On February 9, 2012, the Cavalier Daily reported that though the renovation of the Rotunda's roof had been delayed, the trees would ultimately not be removed to facilitate the project.[3]

The University of Virginia produced a television show, University Perspectives. This episode is about the Rotunda's restoration.