The RWSA is currently in the midst of a nearly $150 million Capital Improvement Program that includes implementation of the Community Water Supply Plan, an upgrade to the Moores Creek Wastewater Treatment Plant, as well as replacements of various sewer lines such as the Meadowcreek Interceptor. 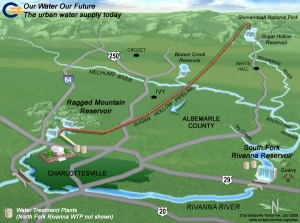 The RWSA was formed June 7, 1972 as a result of state and federal pressure for Charlottesville and Albemarle to work cooperatively on water and sewer services. After each locality separately filed applications for EPA grants for sewer infrastructure around 1971, the State Water Control Board held a public hearing June 14-15, 1971 and adopted a resolution "to the effect that no further Federal grant would be given either to the City of Charlottesville or the County of Albemarle until the two had formed some type of authority to administer the water and sewerage systems of both, since both were dependent on the Rivanna River for their source of potable water and the receiving stream of their wastewater effluent."[6]