Difference between revisions of "Maplewood Cemetery"

The Maplewood Cemetery was established as the town of Charlottesville's first official resting place for the dead in 1827.[1] However, its oldest grave marker is from 1777, which suggests that some graves may have been moved to Maplewood after the cemetery was opened. [1] The cemetery is a few blocks north of downtown, with the main entrance gate at 425 Maple Street. The 3.6 acre historic burial ground is bordered by Maple Street, Lexington Avenue, Taylor Street and 8th Street NE. The land is owned and maintained by the city of Charlottesville.[1] Among the burials at Maplewood are scores of noteworthy citizens who left their mark on the city. In addition, there are over 100 unmarked graves of civil war soldiers.[1] 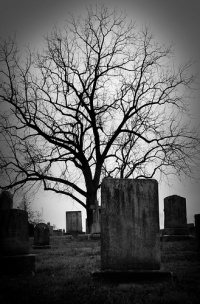 As of 1899, there were between sixty and seventy Confederate soldiers buried at Maplewood, among them field officers – Generals John M. Jones and A. L. Long. There are also a number buried at Oakwood.[2]In the first half of the twentieth century private citizens participated in maintaining the grounds.