Julian Bond (January 14, 1940 – August 15, 2015) worked at the University of Virginia as a history professor from 1992-2012, while simultaneously serving as Chairman of the National Association for the Advancement of Colored People (NAACP). 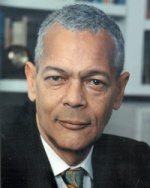 He initially taught at UVA for only a semester upon the suggestion of his friend and professor Patricia Sullivan. He was later asked to officially join UVA’s Corcoran Department of History in 1992. While at UVA, he taught classes on the history of the Civil Rights movement, informed by his personal experiences.[1] He also co-directed an oral history project titled “Explorations in Black leadership” alongside history professor Phyllis Leffler beginning in the early 2000s. Furthermore, he led the Civil Rights South Seminar for about 10 years, where UVA alumni embarked on tours of the landmark sites of the Civil Rights movement in the Southern US.[2]

A few years prior to his retirement, Bond donated a collection of his personal papers to UVA.[1]  The university acquired the entirety of his papers following his death in 2015. They are now held at the Albert and Shirley Small Special Collections Library at UVA.[3] An upper-class student residence building- Bond House - is also named after Bond. The residence hall honors Bond in accordance with UVA’s “tradition of naming residence halls in honor of longtime, well-regarded faculty members.” In addition, the building is located near Nau Hall, where Bond’s office was once located.[4] A professorship, titled The Julian Bond Professorship of Civil Rights and Social Justice, was also created in his honor and to further civil rights education at the university.[5] A biographical film titled “Julian Bond: Reflections from the Frontlines of the Civil Rights Movement” was directed by Eduardo Montes-Bradley and produced by Soledad Liendo and Heritage Film Project.[6] It was first showcased at the Virginia Film Festival in 2012 at the Nau Auditorium.[7] 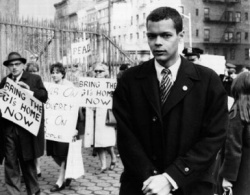