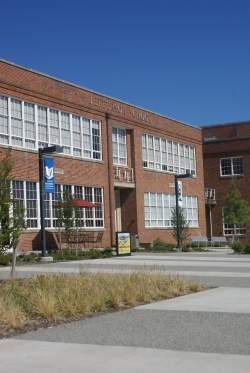 The Jefferson School City Center is a commercial redevelopment of the Jefferson School building in downtown Charlottesville, intended to preserve the school and use it as a community resource providing cultural, educational, and recreational opportunities. The Jefferson School African American Heritage Center and the City’s Carver Recreation Center are the center’s two anchor tenants.[1] The center is home to various other tenants, including the Piedmont Virginia Community College, the Piedmont Family YMCA, Literacy Volunteers, the Jefferson Area Board for Aging Mary Williams Community Center, the Women's Initiative, and Common Ground Healing Arts.[2] 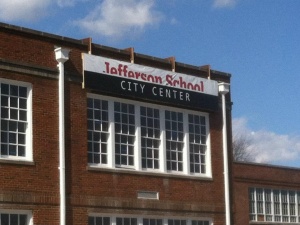 The Jefferson School Community Partnership purchased the building and surrounding land from the city for $100,000. The City contributed $5.9 million to the project, and the Partnership borrowed the remaining funds from Union First Market Bank. The final site plan was submitted in June 2010.[3]

The partnership sought to rezone the school in March 2010 to allow for restaurants to be opened on the site.[4] The Vinegar Hill Cafe, owned by JABA, opened in the center in January 2013.

The city also sought individually protected property status[5], which requires any exterior changes to come before the Board of Architectural Review.

The African American Heritage Center is located in the earliest built portion of the structure, on the north side facing Commerce Street. The Heritage Center honors the history of the school through its redesign of museum-quality exhibition space and offer programs in the arts, dance, language, and computer science. Congressman Tom Perriello secured an $850,000 earmark to help pay for the center's construction.[7]

On the south end of the building, Carver Rec hosts a gymnasium with roller skating and volleyball programs, a kitchen, craft room, dance room, gymnastics room and "kids zone". Carver is one of several recreation centers run by the Department of Parks and Recreation.