Difference between revisions of "Frances Brand" 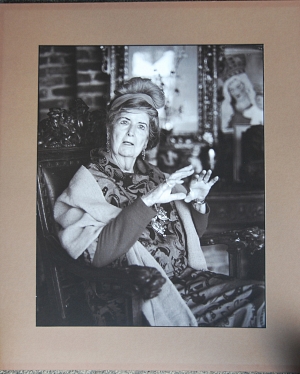 Frances Brand (1901-1990) was a local artist whose most-celebrated work was a collection of portraits called "Firsts" - images of local people who were pioneers in a field or endeavor. [1]

Born in 1901 in New York, Frances Brand married a military man with whom she had two children. At the age of 41, she joined the army where she spent a 10 year career as a liaison (particularly in Germany working with children affected by the Nazi regime), ultimately becoming an army major. [1] Brand once said she was asked out by Al Capone and was once arrested for civil disobedience at a protest organized by Martin Luther King Jr. [2]

Upon her retirement, she studied art at Mexico City College (now the University of Mexico) for five years. [3][dead link]

Her collection of "Firsts" reflects the influence of the Mexican folk painting she studied[4].[dead link]

The "Firsts" were painted between 1974-78 and include 157 portraits (although some may be part of her "modern madonna" series). The subjects are "people that Mrs. Brand had met and befriended in Charlottesville or Albemarle County, people whose strength of character she admired." [5] Many of her portraits were of notable women in the community or of civil rights leaders. Subjects include Nancy O'Brien, the first woman mayor of Charlottesville, Cornelia Johnson, the city's first female African-American police officer, and Jill Rinehart, the first woman elected to city council. [2]

A museum had been open at the site of her home at 111 Washington Avenue in the Jefferson Park Avenue neighborhood. The house was painted purple to honor Brand's penchant to dress in purple. [2] However, her granddaughter sold the house in February 2012. [citation needed]

"Firsts" Portrait subjects and their contributions to the Charlottesville-Albemarle community:

Interview with Frances Brand about her interactions with civil rights leaders, provided by the University of Virginia Library[dead link]