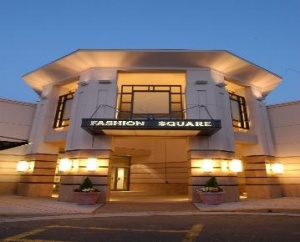 Fashion Square Mall opened in 1980 an enclosed retail shopping mall in Albemarle County that was originially developed by Leonard L. Farber at the southwest corner of US 29 and Rio Road. [2]

As 2020 begins, the 570,000 square foot facility is owned by the Washington Prime Group, which reclassified the shopping center as a "non-core property," down from a Tier II property. [3] A real estate analysis firm, Trepp LLC, indicated in November 2019 that the loan for the mall is in "imminent default." [4]

The property is within the footprint of the Rio Road Small Area Plan which offers guidance for redevelopment.

The Simon Property Group bought the property in 1997. [2] The property became part of a spin-off group that eventually became known as WP Glimcher. [5]

The manager is Karen Weiner. [5]

Sears announced in late December 2018 that it would close its store at Fashion Square Mall in early 2019. [6]

The project was originally to be located in the City of Charlottesville on what is now the site of the Seminole Square Shopping Center[7].

Occupancy at the mall had dropped to 87.1 in 2015. That reflects the closure of Wet Seal, Body Central and Radio Shack all closed. That figure does not include the closures of New York & Company and Men's Warehouse Tux. To attract customers, mall management has held fashion shows, art exhibits and more. [5]

Violence at the mall

The mall has been the center of large fights among teenagers and young adults. In March 2010 the mall had to be closed because of a large melee involving over 100 individuals[8].

In 2012, the mall's management company came under fire following an attempted child abduction that was not reported to police by mall security. A man had grabbed a two-year-old girl in late November 2012. After catching him, security officers let him go and did not report him to authorities. [9]