Elbridge George Haden (1853 - 1933) was well known city realtor and a popularly mayor in early the 20th century. Haden was an elected city-wide mayor for four terms.

During the 1918 flu pandemic in Charlottesville-Albemarle, as a part of the worldwide Spanish flu pandemic, also known as the 1918 flu pandemic, (it didn't reach Albemarle-Charlottesville until the fall of 1918), in view of the spread of influenza, Mayor Haden took aggressive actions, including ordering "all schools, public and private, churches, theaters, and all other places where there were public congregations closed..." and further “ordered the Chief of Police to see that these orders were observed and that no congregation of people be allowed in the city...” until further notice was given. [1]

Before moving to Charlottesville, Haden served as justice of the peace and county supervisor in Campbell County.

In 1908, he was elected mayor of the city and served a two year term. In 1910, he was re-elected mayor for another two-year term.

After an outbreak of rabies in the community, Mayor Haden ordered the police department to shoot all dogs running loose within the City limits. Haden lost his party's support for re-election in 1912, due in part, to the public outcry of his orders. see also 1912 election

Again, in 1916, he was elected to the office of mayor for a two-year term assuming the City’s executive powers and duties. [2]

In February 1912, he was the president of the Park Place Improvement Company. [3]

On February 13, 1912, Mayor Haden, vetoed a residential segregation ordinance entitled "An Ordinance to secure for white and colored people a separate location of residing for each race" passed by Charlottesville's City Council unanimously on February 8, 1912. The reasons given by the Mayor for his veto were that such action would depreciate property values throughout the city. The Council immediately called a special session at which it unanimously overrode the Mayor's veto, "thus putting in place Charlottesville's mandate for segregation of residential occupation of all streets and neighborhoods. The language was similar to that of the Richmond ordinance."[4]

In August 1918, he endorsed the creation of a memorial school to honor Meriwether Lewis. [5] 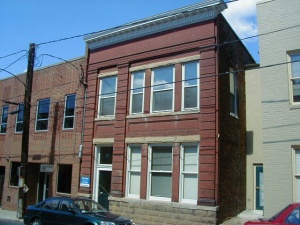 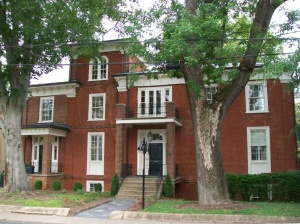 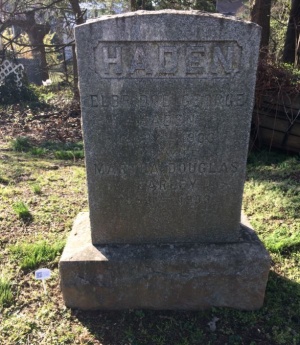 Born on September 17, 1853 on the homestead plantation of the family in Fluvanna County, Haden was the youngest of twelve children of Cpt. William Douglas Haden and Elizabeth Haden. He was brother of Socrates Haden and husband of Martha Douglas (Early) Haden whom he married on February 29, 1876 in Campbell County, Virginia.

Martha Douglas Early, daughter of Abner and Mary Ann Kabler Early, was born in March 1853 in Virginia and died January 22, 1932.

In 1895, Haden established his residency in Charlottesville.[6]

Haden was a member of the Presbyterian Church. He was an officer of the Independent Order of Odd Fellows.

Elbridge George Haden died on February 28, 1933 in Charlottesville and was buried at Maplewood Cemetery.