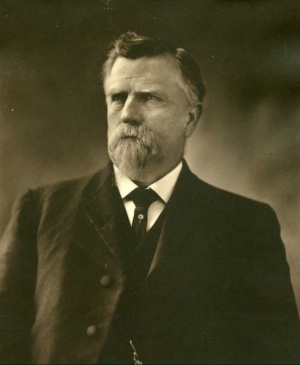 Elbridge George Haden (1853 - 1933) was well known realtor and mayor of the city for two terms. In 1895, he established his residency in Charlottesville.[1]

In February 1912, he was the president of the Park Place Improvement Company. [2]

Haden was elected as Charlottesville mayor in the 1916 election. [3]

In August 1918, he endorsed the creation of a memorial school to honor Meriwether Lewis. [4]

Born on September 17, 1853 Fluvanna County, Virginia, son of William Douglas Haden and Elizabeth Davis, brother of Socrates Haden, husband of Martha Douglas (Early) Haden whom he married on February 29, 1876 in Campbell County, Virginia. Before moving to Charlottesville, Haden served as justice of the peace and county supervisor in Campbell County. In 1908, he was elected mayor of the city and served a two year term. In 1910, he was re-elected mayor for another two-year term. Again, in 1916, he was elected to the office of mayor for a two-year term assuming the City’s executive powers and duties. Haden was a member of the Presbyterian Church. He was an officer of the Independent Order of Odd Fellows. On February 29, 1876, he married Miss Martha Douglas Early of Campbell County, who died January 22, 1932. They had five children, Dr. W. D. Haden, Abner E. Haden, Elizabeth Kabler Haden, Mrs. B. J. Scruggs (who’s residence was near Pantops) and Elbridge Gerry Haden. Born on the old homestead plantation of the family in Fluvanna County, Virginia, Haden was the youngest of twelve children of Col. William D. Haden and Elizabeth (Davis) Haden. Haden died on February 28, 1933, Charlottesville, Virginia and was buried at Maplewood Cemetery.