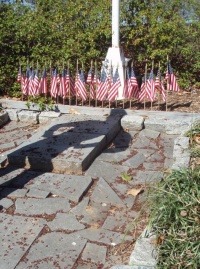 In the 1960s, the United States was at war in Vietnam. In 1966, the memorial was dedicated to those of the Charlottesville-Albemarle area who were killed or missing in action. [1] There is a plaque listing those twenty-three men from Charlottesville and Albemarle who gave their lives for their country during the war. The memorial is rededicated every April, and twenty-three new flags are placed at it to honor those fallen men. The flag, which has flown over the nation’s capital building, is also replaced every year at the rededication. A different veteran of the Vietnam War is the guest speaker every year, and each year the old flag is given to them. [2] Also part of the rededication ceremony is trumpet rendition of “Taps”, a bag-pipe rendition of “Amazing Grace”, and a 21-gun salute. [3] Jim Shisler is the founder of this Vietnam Memorial, and as Dogwood board member is responsible for the planning and execution of the re-dedication ceremony each year. [4]

However,The proposed Route 250 Interchange of the Meadowcreek Parkway will potentially interfere with the memorial at its current location.