Difference between revisions of "Crozet Library" 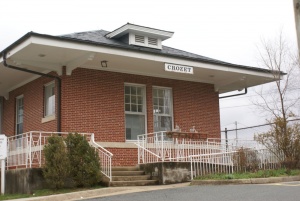 The Crozet Library is a branch of the Jefferson-Madison Regional Library housed in a former railroad depot. As of 2011, plans for an expanded library are on hold due to Albemarle County's revenue shortfall.

A new library was called for in the 2004 Crozet Master Plan. The Board of Supervisors approved construction of a 20,000 square-foot building in March 2007, and appropriated just under $10 million in capital funds[1]. The original estimate for construction was $9.8 million[2]

Construction had been scheduled to begin in spring 2010 with completion in 2011[3]. However, the County's budget constraints removed the project from the Capital Improvement Program[4]. The county is now being asked to advance close to $300,000 for final design so that a fundraising campaign can begin[2]. Even though a construction date is not scheduled, plans are still making their way through government. The Architectural Review Board awarded a Certificate of Appropriateness for the library on April 4, 2011. [5]

Albemarle County Executive Bob Tucker's proposed budget for FY2011 included a 5% reduction in funding to JMRL. As a result, the library's Board of Trustees chose to reduce hours at the Crozet branch as a partial way to make up the shortfall. A community group called Save Crozet Library formed in order to boost support for the library[7].

In July 2010, the firm Dominion Library Associates was hired to conduct an assessment of the Crozet, Scottsville, Louisa County and Nelson County facilities. The Crozet library was deemed to not be in compliance with the Americans with Disabilities Act and "is the most crowded facility attempting to provide library service that this consultant has seen in recent years.[8]. The report called for the library to be shut down until a safer one could be opened. JMRL director John Halliday said that the study was commissioned for $2,000 and was a routine study called for in the library's five-year plan[9]. Supervisors are exploring ways to find a temporary structure to serve as an interim facility while the county saves money to build a permanent one[10].