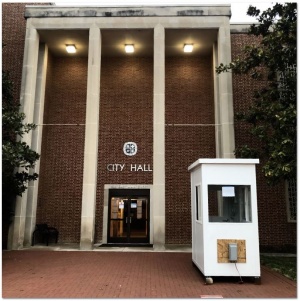 The City of Charlottesville operates under a Council-Manager form of government. Charlottesville voters elect a five member Council to serve at large as the City’s legislative and governing body. The members serve four year terms, and they select one Councilor to serve as Mayor and one as Vice Mayor for two years. Municipal elections are held in November in odd-numbered years. The terms of Council members are staggered so that three are elected in one year and two are elected two years later. If a vacancy occurs, Council has the option to call for a special election or appoint a new member to serve out the unexpired term. [1]

Originating in 1908 in Staunton, Virginia, the Council-Manager plan has become the most widely accepted system of local government in the United States. The City of Charlottesville has operated under the Council-Manager plan since September 1, 1946. Under this form, the Charlottesville City Council is elected at-large. The Council then appoints a professional manager to handle the day-to-day affairs of the city.

The plan is modeled after the American corporation, with its shareholders (voters), board of directors (City Council) and Chief Executive Officer (City Manager). Of the 38 cities in the Commonweath of Virginia, the City of Richmond is the only city operating under the Mayor-Council form of government. However, it is used by a majority of towns in Virginia, inlcuding the Town of Scottesville.

The Council elects one of its members as the presiding officer (known as the Mayor), whose position is primarily ceremonial in nature. The Mayor serves as the official head of the city and generally has the same legislative power and duties as other council members. The Mayor presides over meetings, calls special meetings, makes some appointments to advisory boards and serves as the ceremonial head of government. The Vice Mayor substitutes whenever the Mayor is not available.

According to the revised (2020) city charter, Whenever, from any cause, a vacancy shall occur in the office of mayor, the council shall elect one of its members as mayor for the remainder of the term.

According to the revised (2020) city charter, a vacancy on the council is to be filled by the body “in accordance with the general laws of the Commonwealth.” By law, in order to temporarily fill the vacated position, the remaining member of the council may appoint a qualified voter of the city. This appointment must be made within 45 days of the vacancy. If the appointment is not made or the remaining members cannot agree on a nominee, the judges of the circuit court will make the appointment. This appointed person may only serve until the qualified voters of the city fill the seat through a special election; no election to fill the vacancy is required to be held in the year in which the term expires.

City Council appoints the City Manager, the Director of Finance, the City Assessor, the Clerk of the Council and members of major policy-making Boards and Commissions. Council makes policy in the areas of:

City Council has specific powers to:

Since 2018, regular meetings of City Council begin at 6:30 PM in City Council Chambers. They begin with the pledge of allegiance, followed by any awards, recognitions or announcements that need to be made. Then, Council will invite the public up to speak during for up to three minutes on any item that is not on the agenda. Depending on who has been Mayor, this period either last until everyone had their chance to speak or until 7:35 PM. Up until February 2016, councilors had the opportunity to respond to comments. New rules made after that (and since rescinded) prevented them from doing so and others changes were made as well. [4] These changes were cited by many as leading to tension in City Council Chambers.

One day before announcing a decision to withdraw from the 2021 election, Mayor Nikuyah Walker said the position of city manager is too powerful and should be elected. Walker was vehemently opposed to the firing of Charlottesville Police Chief RaShall M. Brackney. [36] [37]

The UVA Student Council selects one person to serve as liaison to the City Council, a practice that began in 2004. However, the position has been vacant since the first appointee graduated. Maeve Curtain was appointed to the position in January 2015. [38]

At times, Council has been asked to weigh in on issues that are outside of their scope. For instance, a public hearing opposing the Patriot Act was held on July 21, 2003. [39]