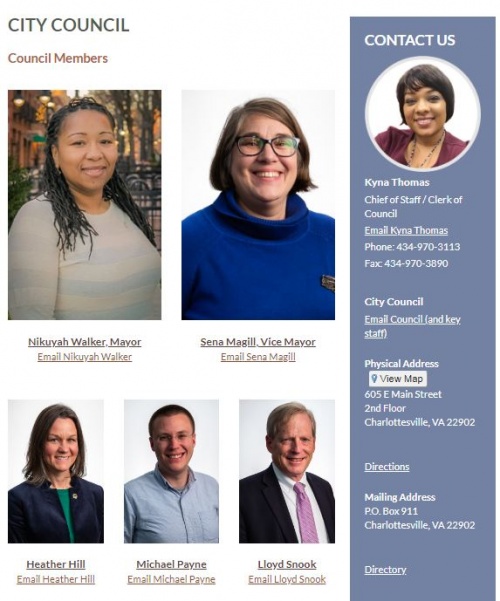 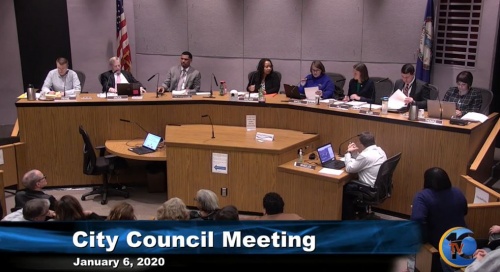 Council chooses one of its own to serve as Mayor, and another to serve as Vice Mayor. Both are two-year terms. Nikuyah Walker was elected as mayor in January 2018, and Heather Hill became vice mayor. [3]

The Council oversees an annual city budget. As outlined in the City Charter, the council has the duty to prepare a budget containing a complete itemized and classified plan of all proposed expenditures and all estimated revenues and borrowing for the ensuing appropriation year.[4] Independent cities in Virginia are authorized to issue general obligation bonds so long as total general indebtedness does not exceed ten percent of assessed value of taxable real property; no referendum required. There is no amount limitation imposed regarding revenue bonds. (Virginia Constitution, Article VII, §10)

Since 2018, regular meetings of City Council begin at 6:30 PM in City Council Chambers. They begin with the pledge of allegiance, followed by any awards, recognitions or announcements that need to be made. Then, Council will invite the public up to speak during for up to three minutes on any item that is not on the agenda. Depending on who has been Mayor, this period either last until everyone had their chance to speak or until 7:35 PM. Up until February 2016, councilors had the opportunity to respond to comments. New rules made after that (and since rescinded) prevented them from doing so and others changes were made as well. [5] These changes were cited by many as leading to tension in City Council Chambers.

At the beginning of 2018, they expressed interest in changing rules for meetings. [6]

Next, the Council will consider the consent agenda, which is a list of resolutions and ordinances that Council has agreed in advance to approve. Beginning in 2003, Council moved this section to the front of the agenda[7] rather than at the conclusion of the meeting. Any item pulled from the agenda, however, will be deferred until after all regular items have been heard.

The UVA Student Council selects one person to serve as liaison to the City Council, a practice that began in 2004. However, the position has been vacant since the first appointee graduated. Maeve Curtain was appointed to the position in January 2015. [36]

At times, Council has been asked to weigh in on issues that are outside of their scope. For instance, a public hearing opposing the Patriot Act was held on July 21, 2003. [37]

With the 1922 election, the composition of the council went from a three member (commission) to the current five member City Council. Council members serve four-year terms and are elected on a staggered basis with two council seats filled at one election and the other three council seats filled at another election two years later. The Mayor and Vice-mayor are appointed bi-annually by the Council from among the five Council Members.

The current form of government has been in place since July 1, 1950, when the City of Charlottesville changed from the modified city manager form of government to the straight city manager form. Since the 1922 election, all Council members have been elected "at-large", with no district residency (ward) requirement. Since the 1928 election, the council has consisted of 5-members, Elections are staggered: 3 in year before presidential election, 2 in year after presidential election.