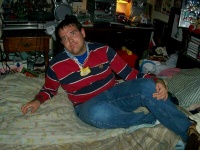 Christian Weston Chandler is a 27 year old Autistic comic illustrator, singer, vlogger and internet celebrity, who lives in Ruckersville. Charlottesville plays an important role in his work, as it serves as the inspiration for his comic's main setting of CWCVille, Virginia. He is well-known to many locals who smile as they see his "Son-chu" vehicle pass by them on our roads, and admire his many chalk graffitos of Sonichu which add color and vibrancy to our suburban metropolis. Chris is easily recognised by a yellow medallion around his neck which resembles the face of his comic's protagonist, Sonichu.

Chandler has been featured in the media regularly, both on television and on the radio, and has worked hard towards the preservation of McIntire Park[1], earning commendation for his efforts by Bob Fenwick. Chris is also a well-known patron of local Charlottesville businesses such as McDonalds, Wal-Mart, Target, Wendy's, The Game Place and the Charlottesville General District Court.

Chris is known for his past work at local businesses (such as Wendy's) and selling Cutco knives, a profession he would have liked to continue had his boss not relocated. He is also an experienced volunteer at children's Pokemon and Yu-Gi-Oh card game clubs where Chris was regarded as a thoughtful leader who fits in well with children. Kids and women alike particularly enjoy his uncanny imitation of Donald Duck, which he regularly performs at his volunteer and paid workplaces. Chris also expresses a passion for working with impoverished African-American youths so that they may one day reach his standard of living.

Chris's main claim to fame is his exceptional semi-autobiographical comic Sonichu, based on his original character of the same name. Chris firmly believes in quality over quantity, and since 2005 has only completed nine issues. Though they thirst for more, his fans understand the creative struggle within, and allow Chris to release comics at his own pace.

The comic itself is a well-executed parody of the Sonic and Pokemon universes, and Chris is sage enough to avoid copyright problems by keeping his comic so underground that Sega and Nintendo are unlikely to ever become aware of it.

One of the more lauded aspects of Chris's art his his depiction of romance. Despite suffering from the socialization problems that stem from autism, he has been able to capture the subtleties and nuances of dating and relationships in contemporary American culture in a captivating and even whimsical way. Especially noteworthy is Chris' depiction of homosexuality in his comics; he is one of very few pop comic artists willing to maturely tackle the controversy surrounding same-sex relationships.

In mid-2009 Chris released the official audiobook series through his YouTube account, making many new fans who were held spell-bound by the fabulous artwork, spot on vocal impressions, and amusing sound effects. Fan-made audiobooks also are in existence, but as these are of a low quality, Chris refuses to endorse them.

Articles on Chris have been published in numerous publications such as Nintendo Power and The Forum, the College Magazine of Piedmont Virginia Community College.[2] Chris is also something of a writer himself, dabbling in shorty stories and poetry, though most of these works are personal and not available on the internet.

Due to Chandler's increasing popularity, many people (including men who dress up in pickle suits, a tribute to a scene in the comics) head towards Charlottesville to visit him.[3] It is also known for gentlemen to dress in the same signature bright multicoloured fashion as Chris, to show they are honest admirers of his work.

Thanks to the exploding popularity of his comics, Chris has received a huge fan following, both on the internet and in real life. Thankfully, Chris is humble and down-to-earth enough to frequently (and politely[4]) address them on his YouTube page. Most of Chris's biggest fans reside in the official Gay 4 Sonichu forum[5], as endorsed by Christian. While at times demanding, Chris does an admirable job of handling fan-questions and concerns on a day-to-day basis.

Christian is also the front man of a one man band independent pop project called "Christian and the Hedgehog Boys." Chris has stated that this project is influenced by every music genre, including jazz, heavy metal and even "washboards and kazoos". The project began in 2006 with the first album "Christian and the Hedgehog Boys". Christian provides all the singing for the album. The album is entirely made up of covers of popular pop and rock songs. Despite what the name might indicate, C&HB remains a solo project.

Chris' vocal style has often been said by fans to be "unique" and "original". He himself has said that his voice has a "Frank Sinatra or Bing Crosby flavor".

Chris lives a quiet life caring for his aged mother and father. Over the last year he has suffered the torment of having three of his sweethearts pass away, but has shown great courage and resilience by rebounding quickly, sometimes within hours. Chris prefers not to work, and instead spends his time creating comics. This uncluttered life allows him to complete a up to three masterfully executed pages a day.

A health enthusiast, Chris strives to remain as "fit as a fiddle." He has been known to curl entire twelve packs of soda and lift chairs to maintain his striking physique. He also tries to get in as many as thirty push ups a day.[6] His love for healthy living, however, does not stop with his daily training. Chris has also been known to play Guitar Hero while standing up, showing that his self-discipline truly knows no bounds.

Both Chris and his parents possess a wide array of collectibles. Chris collects both boys' and girls' toys and games from the 1980s and 1990s. Chris recently showcased his collection in a video tour of his home[7]. In this video Chris also demonstrated his considerable skill with interior design. In a separate video tour[8], Chris showed off his impressive landscaping and gardening abilities, even pointing out the lawn that he meticulously mows.

An avid wildlife enthusiast, Chris notes that he has provided shelter for a large colony of bats. Chris's father, being unfamiliar with the latest internet technology despite being the Thomas Edison of the 60's and 70's, appeared in a later video congratulating his son for broadcasting the videos of their home on the Internet.

Christian Weston Chandler's birth name was, in fact, Christopher. It took a chance encounter with Leonard Bearstein[4] in Richmond's Regency Square Mall for his true, beloved name to be bestowed upon him. Aged 11 at the time, Chris and his father were in the mall for holiday shopping when Chris came across Leonard and engaged him in conversation. The man behind the microphone, mishearing the name "Christopher", addressed the young boy as Christian, a name that struck a chord within the young Chandler's heart. All it took was one legal name change for Christian to assume the identity he carries with him to this day. He acknowledges jokingly that it was as if God spoke through the bear to give him the name he always wanted. [9]

Chris is a proud Methodist and a firm believer in both Dating Education for middle schools and the controversial Lunar Solution in relation to existing tobacco stocks. Although his political views, including those on homosexuality, gun control and drug usage tend to lead towards the right, he did in fact vote for Barack Obama in the 2008 Presidential Election, citing similarities between them both. It's this mixture of humility and insight which has made Chris such a local identity.

Chris is also famous for his anti-war messages, comparing war to a foul beast that pricks everyone with its hateful needles, and placing great emphasis on the gentle warmth that peace offers.

Despite enjoying relative success as an independently published comic artist, Chris wishes to have Sonichu published by a major house. In the past few months there have been rumors that Dark Horse Comics might pick it up. Although Chris would not be averse to work under the Dark Horse banner, his dream would be to publish Sonichu under Archie Comics.

Chris aspires to become involved with the video game industry (being an avid gamer himself), hoping to create the Sonichu game franchise for all of his fans to enjoy. Nintendo, Sony and Sega have each expressed interest but Chris is a tough negotiator, holding out until they offer him full creative control.

In addition to his gaming aspirations, Christian also plans to be a resident of Ruckersville for the foreseeable future, excitedly expressing a desire to inherit his family home when his parents die and live on his own. Christian has vowed that his beloved home shall never fall, and has resolved to take on the work of renovating, repairing, and maintaining the house by himself, using nothing but his unique brand of "elbow greased" strength.