Difference between revisions of "Charlottesville Redevelopment and Housing Authority"

As 2019 ends, the CRHA is at the beginning of a major redevelopment and expansion initiative. [1]

The CRHA manages 376 public housing units in Charlottesville and administers approximately 300 Housing Choice Voucher (Section 8) rental units that are supported through federal funding. It has an annual budget of approximately $4.5 million.

Approximately 2,000 people are housed through these subsidy programs. Participants typically pay 30% of their income for rent and HUD pays the rest. While 70% of the public housing households have an annual income under $10,000, 13% have income under $3,000 per year according to the CRHA.

In order to encourage homeownership, the CRHA provides loans through the Housing Opportunities Program to assist families in purchasing homes if they do not qualify for large enough mortgages. Additionally, through their Down Payment & Closing Costs Assistance Program and the Housing Choice Voucher Home Ownership Program the CRHA helps low income families with down payments and closing costs.

Since 1978, the CRHA has been headquartered in the basement of Charlottesville City Hall. [2] 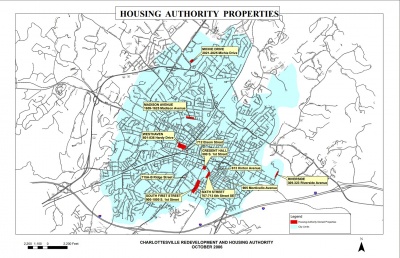 Council passed a resolution calling for an April 15, 1954 referendum on creating a housing authority. [3] The vote was close with 1,105 voters approving the authority, and 1,069 voting no. [4]

In September 1990, the Charlottesville City Manager still served as the executive director of the CRHA. At a retreat in September of that year, Council decided to separate the position. [15] Soon afrer, Earl Pullen was elevated to the position. [16]

Schwarz gave an assessment of his first year in office on July 17, 2006. He pointed out that HUD does not cover the full cost of raising the agency and so it is short by at least $100,000 every year. [17]

In November, the CRHA was notified that the U.S. Department of Housing and Urban Development has taken the Section 8 Housing Choice Voucher Program off a list of "troubled" programs. [18]

The CRHA began community meetings on the topic of forthcoming redevelopment.

The agency placed ads seeking a new position of director of redevelopment. The position remained unfilled as the year came to a close. The job was to have helped coordinate the day-to-day activities involved with creating and implementing a master plan. [19]

The CRHA hired a prevention specialist in January 2008 partially funded through a $20,000 grant from the Charlottesville Area Community Foundation. Schwartz believed that having a CRHA staff who doesn't work in lease enforcement would be good for the agency as they prepared for redevelopment. [20]

By the end of the year, Schwartz told C-Ville Weekly that he was worn-out and he left the position on December 12. [21]

On March 12, 2009, it was announced that the CRHA will receive around $797,000 from the federal government as a result of the American Recovery and Reinvestment Act in order to improve and modernize some aging public housing buildings. [22]

In August 2010, the CRHA voted to approve a master plan to shape the future of the city's public housing stock. A final draft is expected to be finished in the spring of 2010. [23]A Residents' Bill of Rights guarantees that no resident will be displaced during the redevelopment process.

On October 3, 2011, City Council was asked to allocate 140,000 in the Charlottesville Housing Fund towards the purchase of two properties in order to redevelop them as part of the CRHA master plan. One is located at 204 8th Street NW and will be purchased for $60,000. The other is 210 8th Street NW and will be purchased for $80,000. Both sales were well under assessment. The ultimate goal is to develop the whole block, even though the city does not own all of it yet. The city cannot directly purchase the properties, but will buy them on behalf of a non-profit. [25] The Charlottesville chapter of Habitat for Humanity holds the deed for the properties.

In June 2012, seven residents filed a class action lawsuit in federal court against the CRHA claiming surcharges on utility bills were higher than allowed by law. [26] Their lawsuit was filed with help from the Legal Aid Justice Center and former city councilor John Conover.

In February 2013, the U.S. Department of Housing and Urban Development issued a preliminary report that outlined several area of mismanagement at CRHA. The CRHA responded in March that it would address the issues. Meanwhile, the Public Housing Association of Residents complained that both HUD and CRHA both failed to take tenants rights sufficiently into account. [27]

In response to the HUD report, CRHA sought to increase the minimum rent from $25 to $50 and to increase late fees from $10 to $15. PHAR responded that such moves would be "barbaric." [28]

Later in the year, PHAR became concerned about the potential that CHRA would opt to become a pilot participant in HUD's "Rental Assistance Demonostration" project. That would change the financing structure between HUD and CRHA. [29]

Grant Duffield was hired as executive director and took office in May 2016. [30]

The CRHA Board of Commissioners hired Colonial Webb to service heating and air conditioning in all of its units at a cost of $50,000 a year. [31]

Years of talk about redevelopment turned to action as the first approvals began to be granted for various projects.

A HUD audit released in August found that CRHA could not properly document that it followed procurement procedure when purchasing $728,516 worth of goods and services. [33] [34]

In 2020, the Police have responded to 14 shots-fired calls on South First Street in 2020, more than 2016 through 2019 combined, according to CPD data, leading to a push for crime enforcement and cameras from residents. CRHA has decided to finalize a policy to govern its use of surveillance cameras before installing them. [36]

The CRHA is governed by a seven member Board of Commissioners that consists of at least two CRHA residents and one former or current recipient of Section 8 vouchers. The board meets on the fourth Monday of each month in City Council Chambers[37]