Charlottesville is an independent city in the Commonwealth of Virginia with an estimated population of 51,079 as of July 1, 2021. [1] [2]

The city is also the county seat of Albemarle County, though it is an independent jurisdiction with a separate government. The area is home to the University of Virginia which drives economic and population growth throughout the region.

The Bureau of Economic Analysis combines the two jurisdictions as one of 363 Metropolitan Statistical Areas (MSAs) in the nation. Its 2005 population of 188,016 ranked 212th in the nation. [citation needed] The MSA also includes Albemarle, Fluvanna, Greene and Nelson Counties.

Charlottesville was chartered in 1762 to serve as the new county seat of Albemarle County along the Three Notch'd Road from Richmond to the Shenandoah Valley. The town was named for Queen Charlotte Sophia of Mecklenberg-Strelitz, the of wife British King George III. [3] [4]

The initial division of land in the 1760's was "into twenty-eight squares with half-acre lots per square." Four streets were plotted to travel east and west. Five were laid north to south. In the first sale in September 1763, seven people bought fourteen of the lots. Another ten were sold in 1764. The remaining 23 lots were sold in 1765 and divided into fifteen parcels that were used initially for agricultural purposes. [3]

The 50 acres of the original village were laid out under a gridded town pattern. A two acre public square to the north of the grid was set aside for a courthouse and would become Court Square. [5]

Early development was limited because of the distance from a navigable river. The presence of several hills meant that different neighborhood developed independently of each other. Thomas Jefferson purposely distanced his 'Academical Village (the University of Virginia) away from the town center. Commercial activity to serve the university took place on what would become known as the Corner.

The town grew slowly. in 1779, British prisoner Thomas Anburey described Charlottesville as "this famous place we had heard so much of consisted only of a court house, one tavern and about a dozen houses." Only one structure from this period exists today and is now used as the Inn at Court Square. [3]

Charlottesville incorporated as a town on January 19, 1801. [6] The General Assembly authorized a government of five trustees "who were to maintain streets, settle boundary disputes, authorize a market, quiet public nuisances, appoint a town clerk, and collect taxes to no more than $200." [3]

There was an annexations in 1818 that included the courthouse area and was known as Anderson's Addition. [3] Construction of the University of Virginia beginning in 1819 provided jobs and spurred commercial activity within the area.

By 1824, there were about six hundred inhabitants. Throughout the mid 19th century, Scottsville remained the commercial center of the area, but the arrival of first rail line by the Louisa Railroad Company in 1850 connected Charlottesville to the rest of the country via east-west rail. The Orange and Alexandria line followed soon after and connected the town to Lynchburg by 1860. This led to a population boom. In 1855, the Statistical Gazzeteer described Charlottesville as "a flourishing town." Gas service arrived in 1857 and the telegraph arrived in 1860. [3] 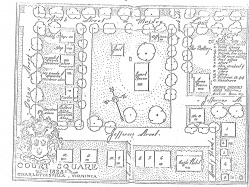 A map of Charlottesville's Court Square from 1828

The form of government changed again in 1851 to a mayoral form of government with four aldermen who could adopt local ordinances. They were also authorized to raise up to $1,000 in local taxes. There was a further annexation of 0.271 square miles in 1860 and another 0.340 acres in 1873. [3]

In 1880, the number of alderman was increased to twelve, and the city was divided into three municipal wards.

Since 1871, all incorporated cities in Virginia have classified as independent cities. Charlottesville became city of second class in 1902. [citation needed]

Governor Henry Stuart issued a proclamation on August 1, 1916 declaring that Charlottesville had become a first-class in excess of 10,000 people. [7]

By the late 19th century, the city was rapidly expanding. Much of this growth was absorbed by the development of the 551-acre Belle Mont Estate into what would become the Belmont-Carlton neighborhood. [8]

Workers were attracted to industrial sites such as Frank Ix & Sons. However, the rise of streetcars and then affordable automobiles as the 20th century progressed allowed for workers to have more choices about where they lived. [9]

Virginia devolved road-maintenance to localities in 1929, including Charlottesville. [10]

In 1933, a plan to widen the 4th Street underpass underneath the railway was discussed by city and railway officials. On August 9, 1933, City Manager Seth Burnley decided to defer work to widen the Chesapeake and Ohio Railway railroad underpass on 4th Street to 22 feet wide. After a morning conference with railroad officials, the $21,000 expense was deemed to be too much. [12] That same summer, city officials and business leaders lobbied Richmond to route traffic at Free Bridge toward downtown rather than along a highway bypass. [13]

Charlottesville's city government is run by a City Manager who is supervised by a five member City Council. One of the councilors is selected as mayor for a two-year term. The current mayor is Lloyd Snook. The current vice-mayor is Juandiego Wade. Councilors are elected every other November to four-year terms.

This city manager form of government dates back to September 1, 1922. Three councilors were elected that year followed by two more in 1923. [15] Prior to that, Charlottesville had a strong-mayor form of government with a bicameral legislature consisting of a Board of Alderman and a Common Council that began in 1916. [16] [17]

Cities are required by the Virginia Constitution to have elected governing bodies, called “councils” composed of not fewer than three nor more than eleven members. [18] Every city in Virginia has its own charter enacted by General Assembly, setting out its specific organization and powers. The current Charter of the City of Charlottesville was adopted in 1946 and has received piecemeal revisions and amendments many times through the years. [citation needed]

Originating in 1908 in Staunton, Virginia, the Council-Manager plan has become the most common form of government in cities with populations over 10,000, mainly in the Southeast and Pacific coast areas. [2]. The plan is modeled after the American corporation, with its shareholders (voters), board of directors (City Council) and Chief Executive Officer (City Manager). The Council-Manager plan provides for an elective council that appoints and removes the manager. The council is the policy-determining agency of the city. It passes ordinances, votes appropriations, and determines whether bonds shall be issued. After the council has made the policies, the manager executes them. The duties of the council are legislative; those of the manager are administrative.

In 2016, the city has paid the Novak Consulting Group $101,250 to conduct an efficiency study for its government structure. This comes nine years after the Weldon Cooper Center for Public Service published an earlier study. The Novak work continues. [citation needed] [19] The study was requested by City Councilor Kathy Galvin. The study is intended to shape budget discussions for fiscal year 2018.

In 2020, Charlottesville awarded a $103,000 contract to the firm Gershman Brickner Bratton to study the city's recycling program.

The city's program operates at an annual defect covered by the general fund. [20]

Charlottesville's government is a member of Virginia First Cities.

The Department of Public Works buys water from the RWSA and the Utility Billing Office charges residents directly.

Charlottesville's government is bound by legal agreements with other area governments and some notable private enterprises:

As the 21st century began, Charlottesville found itself regularly listed among "best places to live" rankings in many publications.

Authors Bert Sperling and Peter Sander selected Charlottesville as the best place to live in the United States for the year 2004 in their book Cities Ranked and Rated.[25] The Arbor Day Foundation named Charlottesville a Tree City USA in 2007.[26]