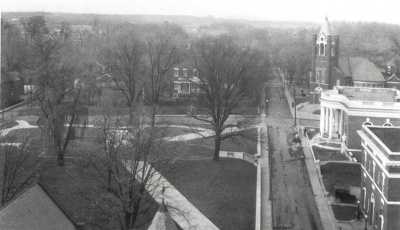 The ACHS' research library, administered by a librarian on the staff of the Jefferson-Madison Regional Library, contains over 6,000 books and bound periodicals, as well as tens of thousands of photographs, manuscripts, maps, pamphlets, newspapers, and vertical files. Its museum collection contains over 3,000 artifacts.

Since 1994, the Society has been located in downtown Charlottesville in the historic McIntire Building. 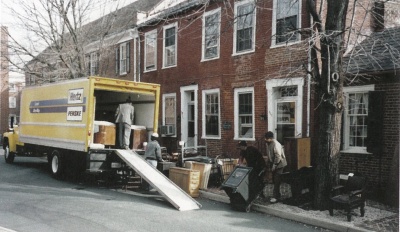 The ACHS moves from Court Square to the McIntire Building. December 3, 1993. ACHS Collections. 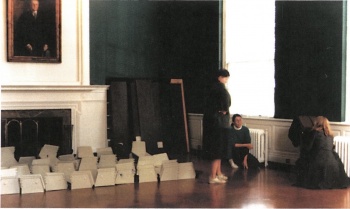 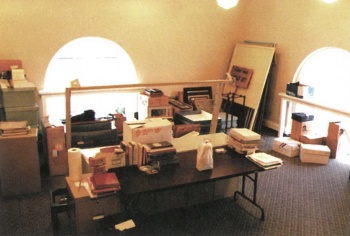 The original item collection of the ACHS. December 1993. ACHS Collections.

The idea of a local historical society had been circulating as early as February 7, 1829, when the editor of the local newspaper the Virginia Advocate printed a letter signed only “P.Q.” of Albemarle, urging that a historical society be formed in the county. It took another 110 years for the idea to be realized by locals.[2] In the spring of 1940, University of Virginia archivist Lester J. Cappon, archivst and future professor Glenn Curtis Smith, and secretary to the Director of Rare Books and Manuscripts Division at UVA Mary Hamilton met in the two-year-old Alderman Library and began to actively pursue creating a society dedicated to exploring and preserving local history. On February 23, 1940, Cappon hosted a second organizational meeting in his office, this time joined by a larger group of like-minded supporters, including University Librarian Harry Clemons. At this second meeting, the idea for a published scholarly magazine was discussed as a priority.[2] In addition to academic research, the group agreed that their work should include the gathering of historic manuscripts, to be preserved as a unique collection at the University of Virginia Library.[2]

On April 4, 1940, the founders’ meeting was convened at the Albemarle County Courthouse.[2] Around two hundred people arrived to support the mission. Virginia State Senator and future Governor John S. Battle delivered a welcome address. Mr. Cappon formally presented the proposal of a research-based group that would dedicate itself to learning more about the history of Albemarle County and Charlottesville, and to sharing what they learned with an interested public. With overwhelming support from those gathered, the Albemarle County Historical Society was created. A year later, the group released its first publication, The Papers of the Albemarle County Historical Society, which continues to be published annually to this day.[2]

On October 1, 1967, The Albemarle Charlottesville Historical Society moved into 220 Court Square.[2] Referred to by locals as “the Museum,” it housed the historic exhibit of a re-created lawyer’s office. In order to facilitate the ownership and management of the property, the organization became a non-profit corporation for the first time. With major volunteer contributions, the Society unveiled its first research library in the basement of the building on October 29, 1974.[2]

In 1984, architectural historian Melinda Frierson was hired as the Historical Society’s first Executive Director. Under her leadership, the McIntire building was acquired in late 1992, with a bigger library, a large new exhibit hall, office space, and room for archival collections. The new and current location opened in 1994.[2] Throughout the 1980s and 90s the Society housed and supported progressive exhibits, public events, new tours, and published research exploring the Civil Rights Movement in Charlottesville, the controversial destruction of the African-American neighborhood on Vinegar Hill, the history of the Jewish community, and the story of Greek and Irish immigration to Charlottesville.[2]

History is not the past; it is the story we tell about the past. Every person in Albemarle County and the City of Charlottesville has a unique and powerful story to tell. Through collecting, preserving, and interpreting the history of our community, we are committed to informing, inspiring, and bringing together all people, creating opportunities for new relationships and new understandings.

Our vision is to reimagine and reinvent the role of the historical society in the twenty-first century: to be a strong civic organization that embraces, in all that we do, the diversity of our community’s history and experience, and promotes a greater understanding of our past, to enlighten the present and foster an inclusive history for future generations.

Our work is grounded in a belief in the worth and dignity of every human being. We respect people, communities, and cultures. We value discovery, creativity, integrity, and diversity. We believe in the potential for history to enrich our lives and to create stronger relationships and more vibrant communities. We approach our work with integrity and transparency.

These efforts include but are not limited to:

Changing Memories: Everyone has a story worth telling

"As our mission states, we believe everyone has a unique and powerful story to tell. Thus, one of our most important goals is to record and archive as many of those stories as we can. We at the Historical Society are committed to an on-going effort to collect a diverse and inspiring library of oral history interviews with people here in the Charlottesville-Albemarle area. More than 50 interviews have already been conducted. And we want to do more. Additionally, we hope to find innovative ways to share these oral histories with the community."

Oral History Collection: Preserving the Voices of the Past

"Once we save memories from being lost, we have to preserve them for the future. Our oral history collection includes hundreds of audio recordings that have been given to the Historical Society, but only some have been cataloged, and none have been digitized. We are currently seeking volunteer help to create a comprehensive catalog and a title sponsor who can help us digitize this collection. We plan to make this tremendous resource available online and include photographs, timelines, and transcripts of the interviews. This is a multiyear project, and a top priority."

Visual History Collection: The Images of the Past

The Archival Collection of the Albemarle Charlottesville Historical Society includes many thousands of unique photographs, portraits, paintings, maps, signs and other images that tell the story of Central Virginia. Only a small fraction of this archive has been digitized and is otherwise unavailable to the public. The majority of these images have never been published and are seldom seen. We are currently seeking funding to catalog and digitize this one-of-a-kind collection, with the goal of producing a new, virtual Museum that would make this entire Collection freely available online to the public for the first time.

Collaborations for Education: No History, No Future

"Currently, many educators and school systems are rethinking how history should be taught in the classroom. Covid has taught us that we need to think more about education outside of the classroom. The Albemarle Charlottesville Historical Society wants to be a part of these conversations and a partner in finding solutions. We are actively seeking to collaborate with educators, city and county schools, the University of Virginia, and other organizations to explore ways to reinvent and improve how local history is taught in the classroom. We are updating programs, such as our Historic Tours, to correspond to Virginia Standards of Learning and to be adaptable to the needs and interests of student groups seeking educational experiences outside of the classroom. And, we are developing educational resources to make available online."

The Frances Brand Collection: The Gallery of Firsts

"Artist Frances Brand (1901-1990) spent the last years of her life in Charlottesville, dedicated to working on her amazing “Gallery of Firsts,” a unique collection of 150 individual portraits (donated to our Archive by her family) of men and women and even some children, black and white, rich and poor, all of whom Brand recognized as being heroes in some way: helping to bring progressive change at last to the Old South. Our hope is to create a new museum experience to exhibit all the Brand paintings and celebrate her magnificent and important work. Like Walt Whitman with his poetry in the 19th century, or photographers with their cameras during the Great Depression, Frances Brand powerfully captured with her art a pivotal moment of time in the American story. Her Collection is a national treasure."

Celebrating the Bridge Builders: Honoring the Legacy of Drewary Brown

"Drewary Brown was among Virginia’s most important and influential Civil Rights leaders. He is remembered as an icon in the Charlottesville-Albemarle area where he spent his life working on the frontlines of history, striving passionately to bring progressive change to the community he loved. He sought to heal a racial divide in his native Central Virginia, touching the lives of generations of men and women, black and white. In the summer of 2018, we began a collaborative partnership with Preservation Piedmont to launch the Drewary Brown Bridge Builders Project, to honor Brown’s legacy and all of those who have followed in his footsteps. This exciting project is imagined to include a new book, museum exhibits, documentary film screening, public events, panel discussion, audio tour, website, teacher’s guide, and a series of video-recorded oral history interviews."

Neighborhood Histories: In Celebration of Community

"We are making connections with city and county preservation councils towards a long-term project to document the history, development, and oral history memories of the City’s neighborhoods. We plan to produce an online exhibit that will pull various historic resources together in one place. The project will also include consultations with area educators to find ways for students to use this information to explore the transformations of the Charlottesville community over time."

The Bill Emory Collection: The Art of the Photograph

"Photographer, artist and local historian Bill Emory has been taking photographs in the Central Virginia region for over half a century. His collection includes many thousands of unique portraits, unforgettable moments of photojournalism, and timeless scenes of artful expression. Despite a popular blog with occasional posts of images, Bill Emory has never had a professional exhibit of his work nor a published print collection. We hope to catalog this historic and amazing body of work, with the aim of creating an exhibit or publication."

Faith and Freedom: A History of Religious Freedom

"There is perhaps no better place in America to study the history of faith communities than Albemarle County, the home of Thomas Jefferson, who placed his Virginia Statute for Religious Freedom among his three greatest accomplishments. Jefferson and many of his founder compatriots believed that freedom of conscience and a plurality of faith communities were vital elements of American liberty and a successful republic. But, exactly how that plurality developed and interacted over time in Jefferson’s own neighborhood has never been comprehensively studied and documented. We intend to do our part to make that happen."

"The past has many stories to tell. Some will inspire. Some will disappoint. And some will want to make us turn away in horror. But as responsible historians, we must be willing to learn from the past: from the good, the bad, and even the ugly. The tragedies of Jim Crow, or racism and segregation in the American South, is a chapter in the American story that was certainly written here in Charlottesville—and not just in words, but in brick and stone. The historic Paramount Theater opened in November 1931 and included an entirely separate entrance on Third Street for people of color. In keeping with the laws of the day, that entrance went straight to the balcony, the only theater seating then open to African Americans. The Paramount closed in 1974 but reopened in 2004 following an extraordinary community-driven restoration process. The Albemarle Charlottesville Historical Society is proud to be collaborating with the Paramount to serve as an historical consultant in the theater’s work to more fully tell the story of its Third Street Entrance."

"We are proud to be partnering with a group of key stakeholder organizations in the community — including the Piedmont Environmental Council, Preservation Piedmont, and the Rivanna Trails Foundation— on a long-term project that will see the creation of a number of new trails in the Charlottesville area. The plan is for this growing trail network to connect Downtown to Monticello and beyond. Our role in the process will be to assist in the research and writing of historic trail markers that will be installed throughout this new network: signage about local as well as natural history."