Charlottesville's Woolen Mills neighborhood is bordered by the Rivanna River to the east, railroad tracks to the south, and Meade Avenue to the west. It is named for the historic Woolen Mills Factory located at the intersection of the river and the railroad tracks.

Council had a long discussion of the neighborhood at its meeting on August 1, 1988. [1]

Part of the neighborhood designated the Woolen Mills Village was added to the Virginia Landmarks Register in 2009[2] in part because of its role in Virginia's textile industry.

The challenge with Industrial land is finding somewhere to place it; no one wants to have it in their backyard.

At a City Council meeting on April 7, 2003, residents opposed a rezoning of 1417 Burgess Lane from R-2 to M-2 so a plumbing, heating and air conditioning firm could operate there. The Charlottesville Planning Commission had recommended denial. Woolen Mills resident Bill Emory said that he would like to see the land use plan come into with the existing zoning on the property. Victoria Dunham said that her house, which is located in the County's portion of the Woolen Mills neighborhood, had become almost entirely surrounded by industrial uses[3]. Several neighborhood residents spoke out against the rezoning, but Councilor Blake Caravati made a motion to rezone the property to B-3.

The issue came up again six years later at a Charlottesville Planning Commission public hearing. Dunham, who was the President of the Woolen Mills Neighborhood Association, brought forth an amendment to the Comprehensive Plan to change the passage.

Many Planning Commissioners agreed that this sentence is unnecessarily editorial. Along with requesting the deletion, Dunham asked Department of Neighborhood Development Services staff to consider altering the Land Use Map to preemptively rezone industrial sections of Woolen Mills. However, the Land Use Map request met a procedural barrier. Any updates to the 2007 map need to take all issues considered during the last update into account before being made. It cannot be amended in a piecemeal fashion.

City Planner Brian Haluska and the Planning Commission discussed the challenge of finding adequate industrial land for economic development and ensuring the quality of life for low-density neighborhoods such as Woolen Mills. The traditional "Euclidian" zoning model sought strict separation of uses, but Haluska also referenced newer models of zoning that seek some compatibility between light industrial use and residential. Haluska acknowledged that, "When we think of industrial we think of smoke, we think of noise." He said there are many light industrial uses that are closer in character to office and technology parks.

While the topic of the hearing specifically dealt with a particular sentence in the Woolen Mills neighborhood plan, Commissioners probed the definition of industrial use for the City of Charlottesville. Most of the City Planning Commissioners spoke in favor of seeing Woolen Mills become less industrial, but, as Commissioner Mike Farruggio put it, "there is no easy fix."[4]

Riverview Park and Meade Park, which hosts a Wednesday evening farmer's market in the summer months, are within the neighborhood.

In February 2012, Bill Emory posted a series of slideshows about the history of the Woolen Mills neighborhood. 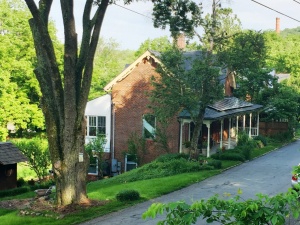 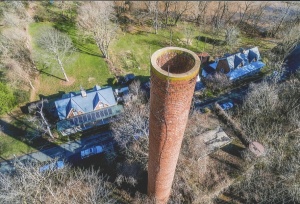