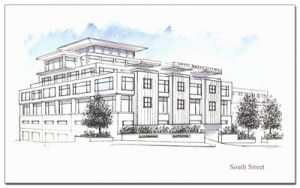 Preliminary rendering of the Waterhouse project, Source: City of Charlottesville

Waterhouse is a mixed-use commercial and residential property located between Water Street and South Street south of Charlottesville's Downtown Mall. It was being developed by property owner and architect Bill Atwood.[1] The project was first approved by the Board of Architectural Review in July of 2006.[2]

Waterhouse was built with six stories, with nine dwelling units built with commercial and office space. [3] Worldstrides moved in from a previous location in Albemarle County in December 2011. [4]

The building was built on the site of the former Downtown Tire Center, which was demolished in September 2010. [5]

The Charlottesville Board of Architectural Review approved the plans for Waterhouse July 20, 2006. [2]