William Mentzel Forrest (October 19, 1868 – February 4, 1956) was an ordained minister, professor at the University of Virginia; and a civic leader in the early 20th century. Dr. Forrest was first elected to the City Council in 1916 [1] and served as President of the Common Council from 1918 to 1922.

In 1916 Dr. Forrest won election to the Common Council, representing Ward Two. (From 1916 to 1922, the City of Charlottesville was comprised of 4 Common Council Districts - each district was represented by 2 Common Councilmen and 1 Alderman.) 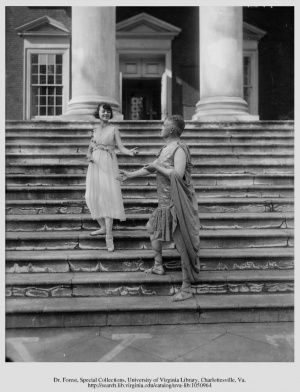 William Mentzel Forrest had extensive scholastic education. He attended public schools of Baltimore; the Transylvania University, in Kentucky; the College of Bible at Lexington, Kentucky; Hiram College, of Ohio, for which he won the degree of Bachelor of Arts in 1894; and the University of Chicago. A profound student, widely traveled, he has lectured over a great section of the United States and India. He preached in churches of all kinds and lectured in various places.[4]

Aside from his professional studies, Prof. Forrest found biographies and reminiscences of great men, (especially literary and religious leader) to be both a most interesting and most helpful line of reading. He was a frequent contributor to the religious press. He was a member of Phi Beta Kappa, of the Colonnade Club, of the Philosophical Society of the University of Virginia, and of the religious Educational Association; and Director of the University of Virginia Y. M. C. A. He retained his ministerial relationship in the Church, and did a considerable amount of preaching as opportunity offered.[5]

After completing his course at Hiram College, and his ordination to the ministry of the Christian Church, commonly known as the “The Disciples,” from 1894 to 1896 he was pastor of a church at Media, Ohio. From 1896 to 1899 he served in the same relationship to the church in Ann Arbor, Michigan. In the meantime, from 1897 to 1899, in addition to his pastoral work, he was a lecturer of the Ann Arbor Bible Chairs. Then he took a cast very far afield, and became lecturer for the Calcutta (India) Bible Lectureship from 1900 to 1903.

Forrest was married at Mt. Sterling, Kentucky, on August 31, 1893, to Maude Mansfield Clark, daughter of Rev. Henry Dickerson and Melissa M. Clark. To them three children were born: Henry Clark Forrest (abt. 1897), Robert Mansfield Forrest, who died in India; and Jean Huntingdon Forrest.[6]

Dr. Forrest and his second wife, Anne Meredith Forrest (née Pendleton; b. 1895), owned Cuckoo, an impressive Federal style house in the small unincorporated area Cuckoo, Virginia near Mineral, Virginia. The house was named for the historic Cuckoo Tavern, which stood nearby from 1788. Built in 1819 for Henry Pendleton, the estate was referred to as "Cuckoo Place" by his decedent, Eugene Pendleton, Anne's father.[7] On August 19, 1994, Cuckoo was added to the list of National Register of Historic Places. [8]

Forrest and his second wife, Anne, moved to the Cockoo Place estate and it was there that he spent his later years grading Bible examinations (given in Virginia high schools) for the State Board of Education [9] preaching as opportunity offered. William Mentzel Forrest died on February 14, 1956 and is laid to rest at the University of Virginia Cemetery and Columbarium.

A street in the Rose Hill Neighborhood was originally named Forrest Street prior to the City Council's approval of the (1916 Annexation). In the 1950's, the city changed the spelling of the street to Forest by dropping one "r". (Note: Charlton Avenue crosses Forest Street and had previously been named "Carlton" until the city change the spelling of that street by adding an "h".)