From Cvillepedia
(Redirected from UVa)
Jump to: navigation, search 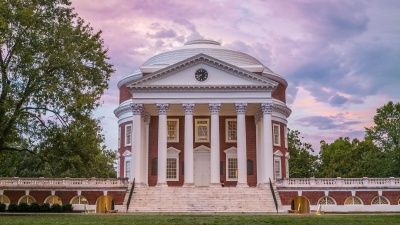 Photo of the Rotunda from the Lawn by Sanjay Suchak, UVA Today.

The University of Virginia (UVa, or informally, The University) is a major economic and development partner for Charlottesville and Albemarle County. The current president is James E. Ryan, who took office on August 1, 2018.

The Central Grounds are technically in Albemarle County, although Charlottesville completely surrounds the original grounds.

On April 5, 1814, Jefferson assumed the role of trustee for the Albemarle Academy in Charlottesville as it was being planned. In a letter to a Dr. Thomas Cooper, Jefferson described his own vision for the academy:

“I have long had under contemplation, & have been collecting materials for the plan of an university in Virginia which should comprehend all the sciences useful to us, & none others, the general idea is suggested in the Notes on Virginia Qu. 14. this would probably absorb the functions of Wm & Mary college, and transfer them to a healthier and more central position. perhaps to the neighborhood of this place.”[1]

Now a trustee planning for the academy, Jefferson finally found an opportunity to establish this university. "Jefferson’s “hidden agenda,” as it has been called, was to transform the duly approved preparatory school into a first-rank university in Albemarle."[1]

In the winter of 1815, Jefferson turned to Joseph C. Cabell after the petitions of the Albemarle Trustees failed to be presented at the General Assembly. Cabell, after a great deal of struggle, passed the bill on February 14, 1816. By the time it was passed, it had been stripped of several important provisions.

The University was first planned by Jefferson and Edmund Bacon, Jefferson's business manager. "Mr. Jefferson looked over the ground some time and then stuck down a peg. He stuck the very first peg in that building, and then directed me where to carry the line, and I stuck the second. He carried one end of the line, and I the other, in laying off the foundation of the University... he rode there from Monticello every day while the University was building."[2]

On October 27, 1895, a "Great Fire" spread throughout Grounds, damaging many buildings and destroying several. [5] [6]

In 1987, the United Nations designated the Rotunda and Jefferson's Academical Village as World Heritage sites.[7]

Slavery and the University

The University could not have been built without labor by enslaved persons, as well as maintenance and cleaning once the Academical Village was open. Enslaved laborers lived in the basement of the new buildings. Students were not allowed to bring the people they owned with them, but many did so anyway and housed them off-grounds. Some slaves were purchased directly by the University such as Lewis Commodore who was bought in 1832 for $580. His duties including ringing the bell and opening the library. [8]

In 2010 a student-led group from the University proposed an idea for a memorial dedicated to the enslaved laborers that built and maintained the University. It is under construction in 2020. [citation needed]

Prepping for the baby boom

On June 10, 2012, Helen E. Dragas, Rector of the BoV, announced that Teresa Sullivan would retire effective August 15, 2012 after a two-year tenure. [10] On June 19, 2012, the McIntire School of Commerce Dean Carl P. Zeithaml was named interim president effective August 16, 2012.[11] However, he announced three days later he would suspend all duties related to the presidency while the Board of Visitors considered a vote to reinstate Sullivan. [12] Following a "Rally for Honor" protest, which drew over 1,500 Sullivan supporters to protest on the lawn, an emergency meeting of the Board met on June 26, 2012 after which Sullivan was unanimously reinstated as president of the University.[13]

Sullivan, who took office on August 1, 2010, announced her intention to retire in January of 2017 and requested that the board of visitors begin a search process for a new president at that time. She officially left office on September 30, 2018. On September 15, 2018, the Board of Visitors voted unanimously to name James E. Ryan and the University's next president. Ryan took office on August 1st, 2018 but was inaugurated formally on October 19th.

In August 2014, the University welcomed it largest first-year class ever with 3,690 incoming students. [15]

The school is ranked #3 for the best public national university and #1 for best value public college. The University of Virginia Health System is nationally renowned academic health system recognized for excellent patient care along with education and research.[16]

On July 17, 2012, the University announced they would begin making online classes available in fall 2013. The classes, created in collaboration with a technology corporation based in Stanford, California called Coursera, would be free of charge and would generate no revenue for the University.[17]

Transportation and the University

In order to limit the number of new parking spaces required and to reduce congestion, the University has created and is implementing a Transportation Demand Management plan that "seeks to establish a strategic approach to meet the evolving parking and transportation needs of its students, faculty, staff, patients, and visitors." A new iteration of the plan was developed between April 2018 and March 2019, updating TDM plans from 2007 and 2011. The plan covers 1,150 acres including Central Grounds, North Grounds, West Grounds, UVA Health, Fontaine, and Northridge. [14] [18]

Economic impact on the community

There are over 12,500 employees at UVa, with an additional 5,500 working at the University Medical Center. These figures represent 15 percent of the total employment for Charlotteasville and Albemarle County. Over 20,000 students contribute to the economy.[19] The University is holding a capital campaign to raise $3 billion by December 31, 2010, and has raised $2.2 billion as of early December 2010.[20] Sullivan has claimed that there is enough physical space to accommodate such an expansion. However, she has said there is not enough faculty to do so.[21] The expansion would likely promote a focus towards science, technology, engineering and mathematics, areas of study being requested by state officials.[22] Outgoing vice president Leonard Sandridge said in a February 2011 interview he felt U.Va could grow within its existing footprint within the next 25 years without having to expand to land near Birdwood.[23]

For the 2010-11 academic year, UVa has 14,297 undergraduate and 6,598 graduate students[24]. UVa officials are also exploring the possibility of expanding enrollments by 1,400 undergraduates over the next five years[24]. President Sullivan told the Chamber of Commerce on November 30, 2010 that the growth will not detract from the community's quality of life[25]. UVA received a record number of applications for the class of 2015, with 23,942 students applying. [26]

The University of Virginia participates in local planning as a member of several planning groups. Alice J. Raucher, U.Va Architect, is a non-voting member of the Charlottesville Planning Commission. The University's Senior Land Use Officer in the Office of the Architect, Julia Monteith, serves as a non-voting member of the MPO Policy Board and the Albemarle County Planning Commission. At those meetings, she often reports on news from the University Transit Service.

The University office of Architect released a Grounds Plan in 2008 that outlines a strategy for infill growth.[27]

UVa oversaw the building of the North Grounds Connector, completed in 2006.

The Office of Community Relations coordinates interaction with citizens of Charlottesville and Albemarle County that are affected by the university's growth.

In 2010, the UVA Board of Visitors approved spending $22.9 million to renovate the Rotunda. The leaking roof will be repaired and the Corinthian decorations on the columns will be replaced[28]. Funding will come from private donations as well as a request from the state of Virginia.

In 2009, the University instituted the Grounds Plan that will direct land-use planning for the next 20 years.[29] The Plan is organized into four sections: The Setting, Framework and Systems, Program and Precincts, and Case Studies.[30]

The school began a new strategic planning process with a series of public forums in December 2012. [32]

Design for a second residence hall in the area of he Brandon Avenue Master Plan was approved by the Buildings and Grounds Committee of the UVa Board of Visitors on March 5, 2020. The 350-bed is for upper-class students and will include a dining hall and gathering spaces. [33]