From Cvillepedia
(Redirected from US 29)
Jump to: navigation, search

United States Route 29 is a significant roadway through Charlottesville and Albemarle County. Plans to build a Western Bypass were debated for many years before the project was derailed by the location of the final resting place of Jesse Sammons. Funding set aside for that project was transferred to a series of projects known as the Route 29 Solutions. 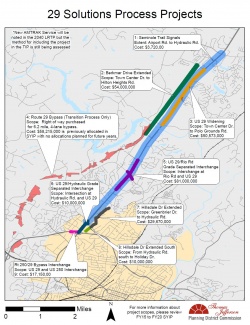 These projects were recommended by Philip Shucet in the spring of 2014 following the demise of the Western Bypass. Their implementation was overseen by the Route 29 Project Delivery Advisory Panel. [1]

The alignment of U.S. 29 follows an old stagecoach route between Charlottesville and Lynchburg. [2] Citizens urged completion of a state highway south of Charlottesville at a meeting of the Albemarle County Board of Supervisors in January 1925. [3]

The issue of grade separation has been much debated with deep reservations expressed by the business community regarding the planned transportation network. Specifically, many voiced opposition to grade separated interchanges, noting that they are costly, disruptive to construct, and could have the affect of disconnecting traffic from vital community enterprises along this commercial corridor." Free Enterprise Forum February Forum Watch[citation needed]

In October 2006, the Albemarle County Board of Supervisors considered a request from the University of Virginia Athletics Department to rename the road from Seminole Trail to Cavalier Way, after the Virginia mascot. The renaming of the road became a front page story in The Daily Progress and the subject of an editorial in the paper. The matter was quickly dropped by the Board of Supervisors and no action was taken.[4]

Three vehicles ran off the road within a mile of the intersection of U.S. 29 and Red Hill Road in southern Albemarle.[when?] [5]

The Places29 Master Plan called for limitations on future intersections between side roads and U.S. 29.

In January 2020, the intersection with Rio Mills Road and Polo Grounds Road was altered to prevent north-bound left-hand turns from U.S. 29 to Rio Mills Road, among other changes. [6]