This article is about The Shops of Stonefield suburban community in Albemarle County. For other uses, see Stonefield (individually protected property)

A sign from when the development was still called Albemarle Place

The Shops at Stonefield (formerly known as Albemarle Place) is a neighborhood model project developed on 65 acres surrounding the Sperry Marine facility at the northwestern corner of the intersection of US Route 29 and Hydraulic Road. The property has been owned by O'Connor Capital Partners since late 2016. [1]

The Shops at Stonefield Development will continue into 2020. Official website: [1]

The site for Stonefield had been noted an "extremely challenging" design environment, with developers having to negotiate the neighborhood model's requirement of inwardly facing buildings and sequestered parking lots, while also satisfying the Architectural Review Board's design considerations for the Hydraulic Road and Route 29 entrance corridors. [2]

The original rezoning was approved by the Albemarle County Board of Supervisors on October 22, 2003. [3] [4].

The development finally opened for business on November 2, 2012 when Pier One opened. [5]

The original developer of the project was the Landonomics Group with the Cox Company serving as project engineer. The original land use request was an application to rezone 63.7 acres from C-1 (Commercial) and LI (Light Industry) to NMD (Neighborhood Model District) to allow a 1.8 million square feet mixed-use development running from Hydraulic Road up US 29. The rezoning of Albemarle Place to Neighborhood Model was approved on October 23, 2003.[6]

Stonefield received a certificate of appropriateness from the ARB on October 17, 2011 for its first major portion of site plans, covering nine buildings including the Trader Joe's at the corner of Hydraulic and 29.[8] The Regal Cinemas building was also approved at that meeting. Brick color on the Trader Joe's building was controversial, and the board required Edens' architects to return with an alternative to the white painted bricks. Board members Chuck Lebo and Paul Wright were consistently against white bricks, forcing a 2-2 tie vote against Edens' revised unpainted white brick choice. The full board later voted 3-2 on December 5, 2011 to allow the unpainted white brick.[9]

The Architectural Review Board provided initial feedback at a meeting on May 16, 2011 and stated the corner of U.S. 29 and Hydraulic Road is one of the most important in the county. [10] In late June 2011, they indicated they could not support the design of the Trader Joe's and Regal Cinemas because they were not similar to previously approved plans.[11]

The first round of development at Stonefield consisted of two phases by Faulconer Construction. [citation needed]

The first was planned to be construction of a 270,000 square feet of retail space, a central plaza and 245 residential units. [citation needed]

The second phase was planned to include a hotel and more residential units. [12] Officials with Edens & Avant confirmed in January 2012 that the hotel will be a Hyatt Place. [13]

The Hyatt Place opened in September. [14]

On June 1, 2012, the Department of Neighborhood Development Services served the developers with a violation notice following the developer's decision to open a 72-inch pipe that carries stormwater. The pipe was to remain closed until the developers added erosion control measures to the drainage channel.[15] The violation was appealed to City Council on July 16, 2012, but council upheld the decision unanimously.[16] In August 2012, Edens appealed the Council's decision in Charlottesville Circuit Court, arguing that they fulfilled their duties toward erosion control. The brief also claims that Great Eastern Management Company, one of the companies who owns the land through which the water drains, is using City Council's decision to try to force Edens to bear the cost of improvements on the land to benefit future development of Seminole Square Shopping Center.[17]

The city and Edens settled[citation needed], but GEMC filed suit a week later. [18] 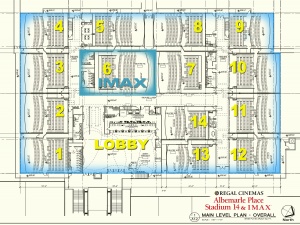 On March 7, 2014, an ornamental canopy attached to an unoccupied building collapsed. Edens attributed the structural failure to winter weather. [25]

At their meeting on September 10, 2008, Albemarle County Service Authority Executive Director Gary Fern told the Albemarle County Board of Supervisors that it was his understanding that the Albemarle Place developers would be paying the costs for the sewer connection to the RWSA's Meadowcreek Interceptor. The Supervisors were told that the sewer capacity would be in place and available when Edens is ready to move forward with the development.[26] A separate upgrade of the capacity of the Meadowcreek Interceptor, necessary to support Albemarle Place, is under construction.

After opening, the development's internal traffic patterns were criticized for not being well-thought out. [28]