Ward elections were held between the mid-1800's and 1947. These elections select a single council member from a corresponding geographical section of the city, called a district or ward. If elected, a candidate represented and remained accountable only to the electors within their home ward. The city was divided into four (4) relatively equal voting wards. With the adoption of their 1947 Charter, the city eliminated its ward system of electing city council members. 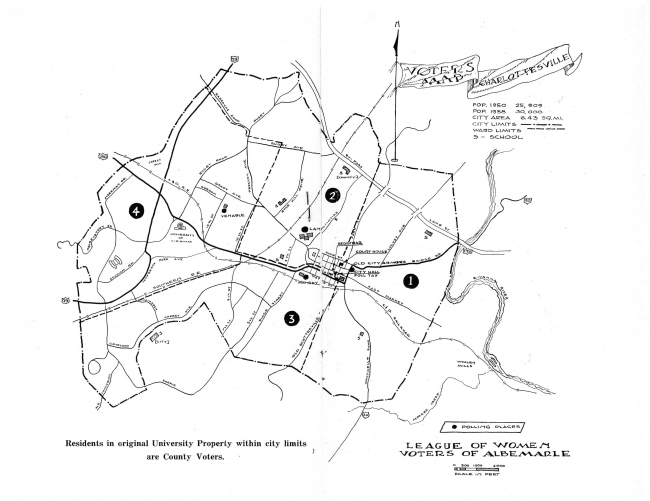 Periodically in Charlottesville’s history, the issue of whether citizens want to continue to be represented by the current at-large members or by ward members elected to City Council has come up for discussion since 1947. Under the current 1947 Charter, all members of the city council are elected at-large to serve the same constituency, which is the population of the city as a whole.

The Charlottesville City Council (2004-2006) first raised the idea of creating the Charlottesville Elections Study Task Force in April 2004 to address public concerns about citizens feeling unrepresented by the current system. [1] An Interim Report of the Study was present to City Council on August 16, 2004[2] The final study noted that any changes to the City’s voting system would require enabling legislation from the Virginia General Assembly and approval from the U.S. Department of Justice. An Addendum to the study included a discussion related to the logistics of changing the voting systems to Proportional-Preference Voting (a form of Ranked-Choice Voting).

The results of the Advisory Referendum

on Tuesday, May 4, 1982, in Charlottesville, Virginia, were as follows:

The results of the Advisory Referendum on Tuesday, May 4, 1982, in Charlottesville, Virginia, were as follows:

On June 8, 1916, at the regular meeting of the City Council, the special committee consisting of W. R. Barksdale, W. E. Graves, J. H. Lindsay and E. A. Joachim, appointed for the purpose of changing the wards to cover recently annexed territory, reported and the following:

The form of municipal elections varies from city to city, with three common variations: some cities elect their local representatives by at-large elections, some by district, and some using a mixed system.

These elections select a single council member from a corresponding geographical section of the city, called a district or ward. District election proponents favor having council members elected to represent individual wards because:

All at-large members are elected to serve the same constituency, which is the population of the city as a whole. At-large election proponents favor having council members elected by the entire city because:

More than twenty percent of municipalities combine these two methods by electing some council members at-large and some from districts. Mixed systems which provide more district seats than at-large seats are more likely to stand Constitutional scrutiny.