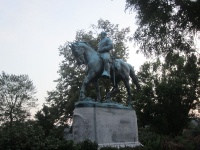 The statue Robert E. Lee is located in Market Street Park and has been the center of controversy regarding its slated removal.

The statue was erected in 1924 after being given to the city by Paul Goodloe McIntire. [1]

The statue was conceived by Henry M. Shrady, completed by Leo Lentelli, and presented to the City in 1924. [1] The reveal of the statue was celebrated with a reunion of confederate soldiers, a parade, and a speech by University of Virginia President, Edwin A. Alderman. [2]

“An equestrian monument conceived by Henry M. Shrady and completed after his death by Leo Lentelli. Presented May 21, 1924, it is located in Lee Park which had already been presented to the City by McIntire. No evidence of the cost of this work has been found despite diligent search. The records of both contracting parties has been destroyed but Leo Lentelli, who completed Shardy’s work and who has assisted Shrady on other similar art works, insisted that the correct figure of cost is $35,000.00” [3]

On March 22, 2016, Councilor Wes Bellamy and activist Zyahna Bryant held a press conference in what was then Lee Park to call for the Lee statue to be removed as well a renaming of the park. [4]

The statue was briefly wrapped in a tarp under orders of City Council.[6] The tarp was repeatedly removed by citizens supporting the statue's existence. The tarp was decided to be a likely violation of the state's Memorials for War Veterans law and permanently removed by the City. The statue is currently surrounded by orange safety fence with numerous signs indicating that that is a violation of city ordinance to go beyond the fence.

The group Virginia's Sons of Confederate Veterans filed a suit in March 2017 claiming that Council's action to remove the statue was illegal under Virginia law. The suit stated the statue and the Stonewall Jackson Statue are war memorials and protected. The suit asked for an injunction barring Council from moving the statue pending a ruling from Charlottesville Circuit Court Judge Robert Moore. [7] [5]

At a hearing on September 1, Moore asked the public to stop contacting his office to sway the decision. That hearing was on a motion for the judge to dismiss the suit based on a 1997 amendment to state law that extended protection of war memorials to cities. At the hearing, Moore did state the plaintiffs had standing. [8]

In January, Moore awarded the plaintiffs over $300,000 in attorney's fees to be paid by the city of Charlottesville. [9]

There are 11 individuals and two organizations who are plaintiffs in the lawsuit. This list is in order of appearance in the brief filed in Charlottesville Circuit Court on March 20, 2017:

The suit names the City of Charlottesville and the five members of City Council as defendants.