The Ragged Mountain Natural Area consists of 980 acres of forest that surround the Ragged Mountain Reservoir. The natural area was originally administered by the Ivy Creek Foundation but that is now being handled by the City of Charlottesville, the entity that owns the property. [1] City Council voted 3-2 in early 2017 to allow cycling on some trails over the objections of the Albemarle County Board of Supervisors. The county claims an ordinance to protect the water supply outweighs the city's land-use decision. [2]

Albemarle County sought a court injunction against the city in April 2017. [3] In October 2018, Judge Richard Moore ordered the two sides to a judicial settlement conference. [4]

In April 1997, representatives of the Ivy Creek Foundation began negotiations with the City of Charlottesville to have the land surrounding the reservoir designated as a "public natural area reserved for quiet hiking, fishing, and wildlife observation[5]." The goal was to protect the reservoir's watershed from development. The foundation agreed to build a rustic parking lot, monitor biological conditions, and create and maintain a trail system.

The project received financial assistance from the Emily Hall Tremaine Foundation, and the Virginia Department of Forestry. The Ragged Mountain Natural Area was opened to the public in March of 1999.

The Ivy Creek Foundation managed the property from its opening in 1999 until 2014. Following the completion of the Ragged Mountain Dam in 2014, however, the foundation board decided to not continue their managerial responsibilities and City Parks and Recreation assumed management of the natural area.[6]

With the completion of the expanded reservoir, the trail system is in the process of being expanded. A floating bridge was installed across the waterway in May 2016.[7]

Visitors can drive to the area by driving down Reservoir Road off of Fontaine Avenue. There are two parking areas. 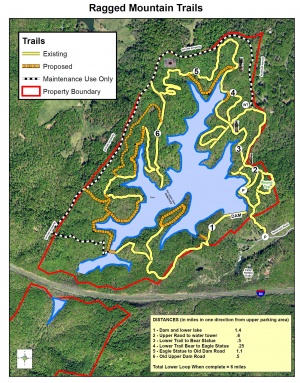 Shortly after the Ragged Mountain Reservoir was expanded with a new earthen dam, officials in the Charlottesville Parks and Recreation Department considered opening up certain trails in the natural area to cyclists, runners and dogs.

The City Council considered the issue on October 19, 2015 at their regular meeting, but voted to table any changes to area rules until an ecological study of the natural area had been completed[8]

Between April and May 2016, Charlottesville Parks and Recreation held four public meetings regarding public trail use.[9]

The parks board held a public hearing in July at which over 75 people spoke with opinions largely split between preserving the trails as is and opening up their use to cyclists. [11] The Board voted 6-2 to allow cycling on some trails that October. [12] Albemarle County Supervisors asked for the City Council to wait on a vote, but Council voted 3-2 in late December 2016 to proceed. [13]

In February 2017, the Board of Supervisors reiterated their concerns and cited an ordinance which does not permit cycling on lands around reservoirs. [14] Albemarle had retroactively disallowed cycling at Totier Creek Reservoir and Chris Greene Lake. [15]

The county filed suit against the city in April 2017. A hearing was scheduled for October 18, 2018 but two days before, Judge Richard Moore issued an order referring the matter to a judicial settlement conference. [3]