This page is intended to be a history of transit and bus lines in the Charlottesville.

A streetcar network formed in the late 19th century but grew obsolete and was underused by the 1930's. Lines included the Charlottesville City & Suburban Railway Company. 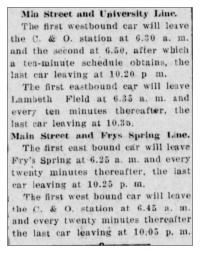 On October 8, 1934, the City of Charlottesville put out a request for bids for a private company to run four buses along the routes that had been covered by the trolley system. [1]

In March 1948, a petition signed by 300 people was submitted to City Council to bring service to the Belmomt area. [2]

Also that month, members of the Young Men's Business Club backed a proposal in traffic and parking survey that buses only be allowed to stop on every other intersection on Main Street. [3]

In 1980, Albemarle County received a grant to pay for bus service from the Lake Saponi area to Barracks Road Shopping Center. [4]