Pleven, Bulgaria is one of Charlottesville's sister cities. 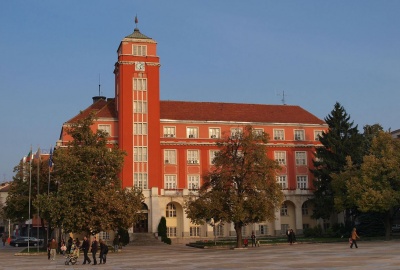 Pleven is in the midst of being demoted to “Sister City Emeritus.” status.[2]

According to Sister Cities International Affiliation Policy: Inactive partnerships may be designated as a “Sister City Emeritus.” Under this category, relationships which are no longer active will still be honored, but the international city will be available for another sister city partnership.[3]

"Pleven Bulgarian (historically known as Plevna in English) is the seventh most populous city in Bulgaria. Located in the northern part of the country, it is the administrative centre of Pleven Province, as well as of the subordinate Pleven municipality. Internationally known for the Siege of Pleven of 1877, it is today a major economic centre of the Bulgarian Northwest and Central North and the third largest city of Northern Bulgaria after Varna and Rousse. Pleven is located in an agricultural region in the very heart of the Danubian Plain, the historical region of Moesia, surrounded by low limestone hills, the Pleven Heights. The city's central location in Northern Bulgaria defines its importance as a big administrative, economic, political, cultural and transport centre. Pleven is located 170 km away from the capital city of Sofia, 320 km west of the Bulgarian Black Sea Coast and 50 km south of the Danube. The river Vit flows near the town and the tiny Tuchenitsa river (commonly known in Pleven as Barata, literally "The Streamlet") crosses it. The climate is temperate continental, with cold winters (down to –15°C) and hot dry summers (up to +35-40°C)."