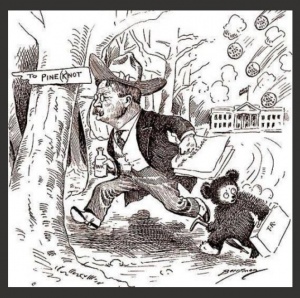 In a cartoon entitled, "To the Woods," President Theodore Roosevelt is depicted escaping the business of the White House with "Teddy Bear" for his vacation retreat, Pine Knot. November 1, 1906 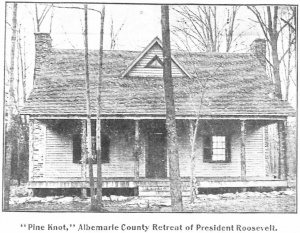 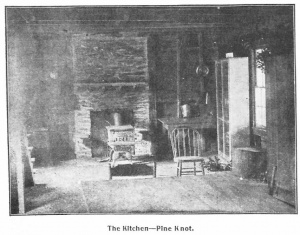 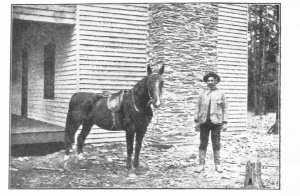 From 1905 to the end of his term in 1909, Pine Knot was a rural retreat for President Theodore Roosevelt and his family. Located about halfway between Charlottesville and Scottsville, it still stands on property which was originally part of the estate, “Plain Dealing,” near the small community of Keene on Rt. 712 off Rt. 20 South.[1] [2]

On May 8, 1908, President and Mrs. Roosevelt and John Burroughs arrived at Pine Knot after traveling by train from Washington to North Garden. This would be Roosevelt’s last visit to the rustic retreat that had no running water, no electricity and most importantly no White House business.[3] [4]

John Burroughs (1837-1921) was one of several naturalists whom Theodore Roosevelt knew because of his role in the evolving conservation movement of the early twentieth century.

The 90-acre Pine Knot grounds are owned by the Edith and Theodore Roosevelt Pine Knot Foundation. There is no running water or electricity at the small cabin that Roosevelt used as a getaway while he was president. The foundation is seeking special-use permits to expand the profile of the historical resource and plans to hold monthly events. [5] There are also tentative plans for a historical center to house exhibits.

The Daily Progress reported that Roosevelt spent Christmas at Pine Knot in 1905. [7]

As of 2012 the owners of Pine Knot are seeking to construct an historical center for the site. In addition, they have requested that the maximum number of attendees for special events be raised from 150 to 200 and would provide for transportation to and from functions held.