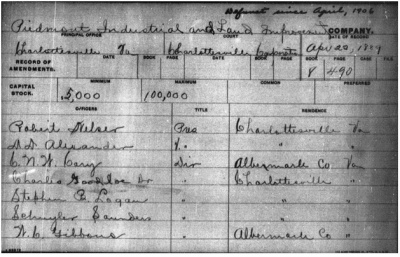 Formed in 1889, the Piedmont Industrial and Land Improvement Company was an all-African-American member development company whose purpose was to buy and sell real estate as well as “to extend aide and assistance, financial or otherwise to persons of limited means in the purchasing of homes.” This Charlottesville-based mutual-aid society assisted African-Americans and was well received in the last decade of the nineteenth century. The Piedmont Industrial Land Improvement Company was active in the Canada Neighborhood and adjacent Gospel Hill Neighborhood and Vinegar Hill neighborhood. [1]

According to the City Charter Book 1:17, City of Charlottesville Courthouse, Charlottesville, Virginia, on April 9, 1889, The Piedmont Industrial and Land Improvement Company was formed by the following nine (9) members: [citation needed]

The officers of the first year were:

”The property owned by the Piedmont Land Improvement Company was described in the land tax books for 1890, in the listing for 'colored' property owners, as being located on the north side of the cross street that ran from Ridge to the Lynchburg Road. This would most probably be Dice Street and/or Oak Street where a number of African-Americans already lived. In the same tax book, again in the "colored" section, John Fry's lots on 6th Street are listed. Benjamin Tonsler lived on 6th Street and several of his relatives and children lived in houses on the same street; R. Kelsor is recorded in the City Directory of 1895 as having a business at 225 West Main Street and living at 205 6th Street NE, which would have been in the Vinegar Hill neighborhood, north of Main Street. A number of other African Americans were directors of the development company, including Charles Goodloe who lived at 604 Dice Street and members of the Coles Family, John Coles and Charles Coles who lived at 217 5th Street. John Coles and Charles Coles, along with presumably their brothers or sons are all listed in the 1898 City Directory as "carpenters," who clearly would have played a part in building on whatever land the Piedmont Land Company developed.

The company was not long-lived, as it does not appear in the 1895 or 1898 City directory, but it does indicate that the African-American community was involved in the land development business in Charlottesville the booming years between 1890 and 1907.” [2]