The Orange Dot Project was created in 2011 by Ridge Schuyler and Meg Hannan "to create jobs so families can become self-sufficient."[1]

On September 10, 2011, the Orange Dot Project released a report that quantified the annual local income deficit, which Orange Dot defines as the difference between what a family receives as income and what they need to receive in order to be self-sufficient. Their report stated that 20% of Charlottesville families made enough to be considered above the poverty level, but not enough to be self-sufficient.[2] The report was created for the Greater Charlottesville Area Development Corporation.[3] 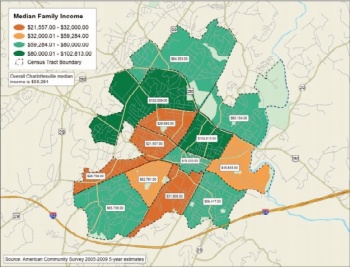 In addition to the report, Orange Dot intends to create a job hub to connect local businesses with low-wealth families.[4] As part of this effort, the Thomas Jefferson Partnership for Economic Development (TJPED) will conduct a survey of low-income families to assess skill level and community needs.

The mission of the Orange Dot Project continues with the Green Dot Project, a for-profit initiative organizes by Toan Nguyen and Bernard Whitsett. [5]

The project was updated in September 2015. [citation needed]