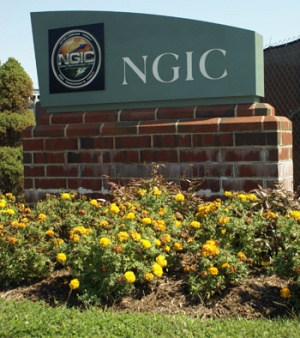 Entrance to the National Ground Intelligence Center (NGIC). WARNING: Do not take photos in this area.

NGIC is a subordinate of the United States Army Intelligence and Security Command that provides scientific, technical, and general military intelligence in support of the U.S. Army's foreign ground forces. The NGIC also manages the Army's Foreign Materiel Exploitation Program and foreign materiel acquisition requirements and constitutes a single authoritative source for comprehensive ground forces threat to the Army and other services.[1]

NGIC is part of the Joint Use Intelligence Analysis Facility in Rivanna Station. The property for the base property was purchased by the government from developer Wendell Wood's United Land Corporation, and is located at 2055 Boulders Road, off Route 29 within the Community of Piney Mountain, one of Albemarle County's designated growth areas.

The current director is Colonel Christoper C. Rankin who assumed command on July 13, 2021. [2]

NGIC was created on 8 July 1994, by merging the FSTC with the US Army Intelligence and Threat Analysis Center. The former headquarters of FSTC in Charlottesville became the headquarters of the new Center[5].

NGIC last moved from what is now the SNL Financial building in downtown Charlottesville to its current home at Rivanna Station in 2001. [citation needed]

A $58.5 million expansion was completed in 2011, which created a joint-use intelligence analysis facility with the DIA. It was believed that between 650 and 800 families would be relocated to the area. [6]

Construction of the expanded facility began in May 2008, designed to accommodate 1,000 people, with parking for 625 vehicles. The first 120,000-square-foot office building was expected to be completed in January 2009, and a second building of around 150,000 square feet is to be constructed around September 2009.[7]

Michael Harvey, former executive director of the Thomas Jefferson Partnership for Economic Development, said at the time the high-paying jobs with wages of around $80,000 would create a significant impact in the local economy.[7] </ref>