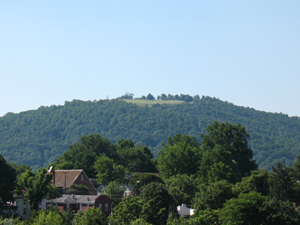 View of Montalto from Downtown Charlottesville

Montalto is the 1,278-foot-high mountain that makes up the view from Monticello's back steps, and is the grassy mountaintop visible from much of Charlottesville and Albemarle County. Thomas Jefferson referred to it as the "high mountain" that formed the view from his "little mountain." Jefferson purchased Montalto in 1777.

The Thomas Jefferson Foundation (TJF), which owns and operates Monticello, purchased 330 acres of Montalto in 2004. In 2008, the Piedmont Environmental Council partnered with the TJF to permanently protect 150 acres of Montalto's most visible lands with a conservation easement. The Saunders-Monticello Trail runs parallel to Route 53 and provides access to the base of the mountain.

Repose, the main house on the summit of Montalto, was completely renovated as a conference/retreat center and opened for its first conference on May 13, 2011. Area dignitaries attended a formal opening of the facility, named the Robert H. Smith Center, on June 14, 2011. Repose was originally built in 1910. The house was restored with duplicate clay roof tiles, the originals having been long missing, which makes the house stand out with its striking orange tint.