The Sacagawea, Lewis and Clark Statue is an historic statue that commemorates the Lewis and Clark Expedition. Paul Goodloe McIntire gave the statue to the City of Charlottesville as a gift in 1919.[1] It was sculpted by Charles Keck The pedestal is made of Balfour Pink Granite and is fourteen feet tall.[1] The bronze statues are eight feet, four inches tall.[1]

Charlottesville City Council voted on November 15, 2019 to direct staff to come up with a plan to remove the statue, following a work session attended by descendants of Sacagawea. [2]

The original reliefs on the pedestal depict the Pacific slope, the American Eagle, and the seals of the United States and Virginia.[1] There are also bronze bas-reliefs at the base of the statue. The statue was made by Charles Keck.

Sculptor, Charles Keck. Unveiled, November 21, 1919. Located junction of West Main and Ridge Streets. This work is of the romantic school. It is a three-figure group; Meriwether Lewis, William Clark and Sacajawea, the young Indian guide with her child. Present Main Street is the Colonial Three-chopt Road, which led from Richmond, passed Boyd’s Tavern and crossed the Rivanna at Secretary’s Ford—now the Woolen Mills (East Market Street). Crossing Mechum’s River it struck in a straight line for Woods’ (now Jarman’s) Gap. It was in use prior to 1746. Though not associated with the expedition, it was felt appropriate to place the explorers on a great early artery and facing into the West.

Controversy arose because of its depiction of Sacagawea behind Lewis and Clark.[3] Protestors objected that her bowed head looking down suggested subservience.[4] However, the historian speaking at the statue's unveiling in 1919 said she was the expedition's dauntless guide across the Rockies, the pathfinder.[5] The protests led to the addition of a plaque clarifying Sacagawea's contribution to the expedition.[4] 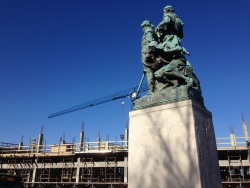