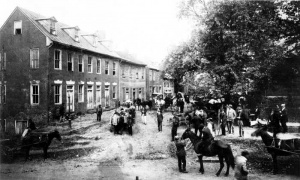 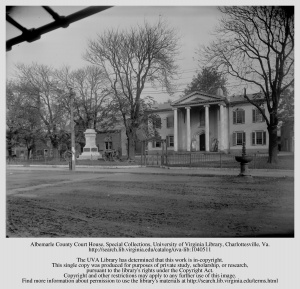 McKee Row (1912) can be seen on the left through the trees. Photograph courtesy of the Holsinger Studio Collection and UVA Special Collections

McKee Row was a majority Black section of businesses and residences[1] directly west of the Albemarle County Courthouse in downtown Charlottesville. In 1914, the Albemarle County Board of Supervisors confiscated the land from its residents and granted it to the city, citing “rowdiness” that they believed could potentially impact white businesses.[1] A school for white children was planned for the space, and the buildings were torn down in 1918.[2][1][3] Instead, Paul Goodloe McIntire bought "all the property between Jefferson St., High Street, 4th St., N.E. and the County Court Building, assembled from 4 owners, and known as KeKee's [sic] Row. This park also includes a narrow lane, called McKee's Lane, lying between the Row and the County Court." [4] He deeded the land back to the city on January 29, 1919, on the condition that it would be used as a public park (Court Square Park) to house a south-facing statue of Confederate general Thomas “Stonewall” Jackson and "no other building or monument."[5][4][6]

This site had historically been a mixed-use space. In 1828, there was a printing shop, a dry goods and grocery store, a hatter’s shop, and a merchant’s shop, each with private residences above.[7]

The razed buildings of McKee Row and a dirt alley were covered with several feet of soil when the park was laid out by architect Walter Dabney Blair. The foundations of the eastern edge of the buildings still sit below where the statue once stood.[8]