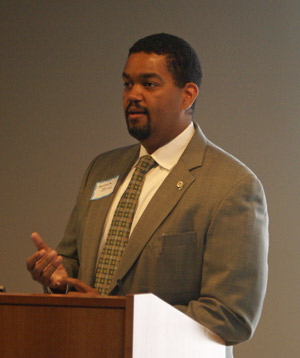 He had previously been serving as the acting city manager since April 12, 2010 following the resignation of Gary O'Connell.

Jones was one of three finalists in a bid to become the permanent city manager later that year. [5] His selection was a unanimous choice by the Charlottesville City Council (2010-2011).

As part of his contract, Jones initially made $170,000 a year. He was also eligible for a no-interest loan of a down payment for a home within Charlottesville city limits.[6]

In September 2013, Charlottesville City Council (2012-2013) was set to hear details of a potential $17,000 bonus on top of Jones' salary. Jones has proposed helping communication between the Charlottesville Redevelopment and Housing Authority and the Public Housing Association of Residents. [8]

In late December, Jones had to ask for an extension of a requirement he move into the City of Charlottesville by the end of 2011. Charlottesville City Council (2012-2013) agreed to extend that deadline to the end of September 2012. [9] Jones currently lives in Earlysville, which is in Albemarle County.[10] Jones met the Septmeber 1, 2012 deadline just in time by purchasing a house in the Greenbrier neighborhood, but he will retain ownership of his Earlysville home for the time being. [11]

Jones was born at the Dewitt Army Hospital at Fort Belvoir in Fairfax, Virginia. He grew up in Dale City, Va.[10]

From February of 2008 to April of 2010 Jones served as Assistant City Manager. Charged with leading the City’s community relations efforts, Jones served as the primary staff contact on the City’s Dialogue on Race initiative; worked with then Police Chief Timothy Longo, to establish the Citizens Advisory Panel; managed the City’s Quality of Service and Efficiency Study; and worked with neighborhood associations and residents on variety of community issues.[17]

Jones and his wife, Michele, have five children [10]

In the fallout of the 2017 Unite the Right rally, the Charlottesville City Council (2018-2019) announced it would not renew his contract. [3]