From Cvillepedia
(Redirected from Louisa)
Jump to: navigation, search

Louisa County is a county located in the Commonwealth of Virginia. As of the 2010 census, the population was 33,153.[1] The county seat is Louisa.[2] 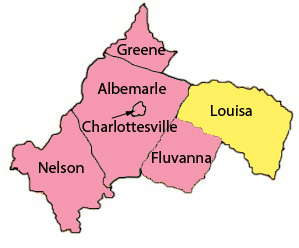 Louisa is a member of the Thomas Jefferson Planning District. Louisa's population increased by nearly 30 percent between 2000 and 2010, according to the U.S. Census Bureau. [3]

On February 16, 2021, the Board of Supervisors approved a revision of the zoning ordinance to add several growth overlay districts. Construction in these areas are subject to the architectural design review. [5]

In the general election, two of the magisterial districts have contested races and another two have candidates who are running opposed.

Duane Adams is unopposed in the Mineral District.

Tommy J. Barlow is unopposed in the Mountain Road District.

There is a Louisa County Landfill that is still operational. The Board of Supervisors approved a new solid waste disposal cell at its meeting on September 4, 2019 at a cost of $2.4 million. [8]