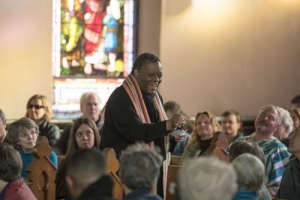 Liberation and Freedom Day is a municipal holiday in Charlottesville celebrated on March 3 to commemorate the day Union Major General Phillip Sheridan and his troops arrived in Charlottesville liberating over 14,000 enslaved people.

Charlottesville City Council designated the day as an official holiday at their meeting on July 1, 2019. [2]

In addition to many white residents of Charlottesville supporting the pro-slavery effort and the anti-black violence and legislation that crescendoed throughout the Civil War, the Confederacy forced African Americans into labor for the pro-slavery war effort. Free blacks between the ages of fifteen and fifty were required to report to the courthouse, where they were examined by a doctor from the Charlottesville General Hospital who determined how and where they should work. If they did not report, they were taken by gunpoint.[5] Against the protestations of their owners, slaves were taken, too. Between 1862 and 1864, about 940 slaves were impressed.[5] It is unknown how many free Black people were impressed. Isabella Gibbons was forced to treat Confederate soldiers as a nurse in Charlottesville General Hospital.

Union troops approached Charlottesville in early 1865, arriving on the morning of March 3. Many white Charlottesvillians were convinced that the troops would burn the University of Virginia, which was treating Confederate soldiers in their hospital for battlefield wounds and illnesses.[6][7] Over the course of the Civil War, about 22,500 wounded Confederate soldiers and a few captured Union soldiers were tended to at the University-run 500-bed Charlottesville General Hospital. The superintendent was professor and doctor J.L. Cabell.[5].

The University also had produced over one thousand Confederate soldiers for the pro-slavery effort, second only to the Virginia Military Institute, which had been ransacked and burned by Custer’s troops en route to Charlottesville.[6] Charlottesville Mayor Christoper L. Fowler decided to surrender. The University of Virginia, represented by law professor John Barbee Minor, chairman of the faculty Socrates Maupin, and rector Thomas L. Preston, surrendered to the Union.[7] They argued that the University had been founded by President Jefferson and would be a benefit to the entire nation, not just the Confederacy.[6][5][7]

The major target was the iron railroad bridge that carried the Virginia Central Railroad over the Rivanna River, was destroyed. About a dozen warehouses storing foodstuff and military supplies were burned, along with Woolen Mills.[5][7] A mill owned by the Marchant family, which had been producing Confederate uniforms, was destroyed. Some homes in Charlottesville were ransacked, but not torched. Houses outside the city limits were generally fared worse. Monticello, a tourist destination for Union troops during occupation, was unharmed.[5][7]

Over half of Albemarle County was liberated from slavery that day as the Union line reached them (or, in several cases, they emancipated themselves by escaping past the Union lines), including the hundreds of people held in captivity by the university's professors, students, and the school itself.[6][5] Most chose to seek safety with the Union troops and followed them as the army moved east toward Richmond. The continuing Union occupation of Virginia meant that these self-emancipators did not need to leave the state, even after the Confederate surrender at Appomattox in 1865. March 3 is celebrated as Liberation and Freedom Day in Charlottesville.[6]