The Junior League of Charlottesville is the local chapter of the national educational and charitable organization of women that promotes volunteerism, developing the potential of women, and improving communities through the action and leadership of trained volunteers. 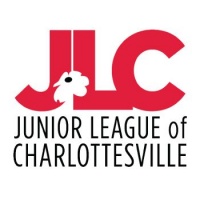 The organization's stated goals include enriching the lives of its members and community partners through volunteerism that positively impacts families in the community, and believes the quality of children's lives can be improved through the education and support of their families. Annual community programs include Mistletoe Market, Vintage Vegas, and Kids in the Kitchen.

The Junior League of Charlottesville was organized in September 1932 by Ms Dorothy Smith. It was originally called the University League, probably because most of the founding members were daughters of the University professors. The University League became an official chapter of the Association of Junior Leagues International in 1981. The Junior League of Charlottesville has assisted in the inception and running of many community organizations including the Garrett Barrett Day Care Center, the Senior Center, and the Virginia Discovery Museum.

Dorothy Smith, now Mrs. Edmund Berkeley, graduated from college in 1932 and she sought advice from her friend, Miss Laura Lee Dorsey, then headmistress of Saint Anne's School, about what the young women of Charlottesville could do with their spare time. Miss Dorsey said she admired the work done by Junior Leagues and suggested the formation of a small organization patterened after them. She invited eight of her former Saint Anne's students to a luncheon at Farmington Country Club, and this became the organizational meeting of the University League, with Dorothy Smith Berkeley becoming its first president.

Some of the earliest works of the League included delivering 50-pound sacks of flour and sugar to mountain families, witnessing firsthand the desperate circumstance under which some people lived during the Depression. The League taught its members to be volunteer occupational therapists, as University Hospital could not afford workers in this field. They manned booths for the Red Cross and Joint Welfare Reform, provided labor and materials for the Children's Home redecoration, and created children's baskets for Christmas and Easter.

One of the largest projects undertaken during this period was the creation and the funding of what was then called the Opportunity School. Run out of the Venable Elementary School, it provided special education instruction to up to 15 mentally disabled students (the very first special education teacher in the City of Charlottesville's school system). The League provided half of the teacher's salary for the first several years of the program, until it was permanently part of the annual school board budget.

Estabished during the Great Depression, fundraising was a priority for the League from the outset. The earliest Universty League fundraiser were dances. These events were disbanded after a 'Black Out' themed dance in 1940; held at Fry Springs, sandbags were the main decorations, and the guests came dressed as they supposedly were when the sires sounded. As a money-raiser, the venture was successful, but according to Ella Grigg, 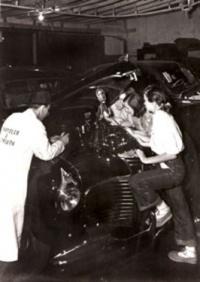 When the United States entered World War II in 1941, League time was devoted to the war effort. The organization when through a period of confusion, for its officers and members were consistently leaving town to go into the service or to join husbands who were in. There was serious talk of disbanding the League, but some of the old members were able to hold the organization together. They developed and staffed a motor corps for the Albemarle Chapter of the National Defense, trained to be ambulance drivers, and organized and staffed a 24-hour canteen that provided sandwiches and coffee to troop trains traveling through Charlottesville.

At the end of the war, many members returned, ready to rejoin the JLC's efforts, and membership increased as male University students' wives (nearly 50 of them) who were Junior Leaguers elsewhere asked to work with our League. Projects undertaken after the war include painting and redecorating rooms at the Old Children's Home, Saint Anne's Preventorium, and preparing holiday baskets for area children. The League published a new station wagon for use by the Girl Scouts, Child Welfare Association, and the Community Chest, provided seed funding to create the Visiting Nurses Association, and purchased an isolette for use by the Martha Jefferson Hospital nursery. The League initiated several cultural events that introduced area school children to the arts, such as initiating a children's theater and puppet show.

League members outside the store, 1946

In 1946 the League established its Opportunity Shop, a consignment store who's proceeds funded grants for community projects and which greatly increased the noteriety of the League within the Charlottesville community. The first store was a rundown, unheated building which was operated at a cost of $10-$15 per month; League members worked as the janitors and maintnence workers. The Shop existed in at least three locations, before finally closing it's Downtown location in 2002.

1946 was also the first year the League produced the Follies/Cabaret, a semiannual event held until 1983. These productions were all quite involved and require the hiring of a professional director/ choreographer, weeks of rehearsals, and sometimes even involved husbands in the act. The first event cleared $2,500 and was used to start the Children's Theater and to operate a Receiving Homes for children. The 1953 Cabaret cleared over $3500 for the benefit of the Speech and Hearing Center, which had just opened at the University of Virginia. The 1957 Cabaret produced $6700, part of which was given to Child and Family of Services. Cabaret yielded $7800 in 1960 and $8000 in 1962 in net proceeds and went to create a Community Services Trust Fund, set up in 1959 to handle the League's ever-growing fundraising success.

By 1960, League members researched, funded, planned and manned a Senior Center. Our efforts were so successful that the Senior Center was an independent agency by 1965. the League continued to support, in dollars and volunteer time, many other area non-profits. We also sought to bring arts enrichment programs and activities to the area by sponsoring and staffing the Artmobile, creative dramatics workshops for area teachers, and persuading Charlottesville Daily Progress to publish a fine arts column.

In early 1982, the League researched, established and then operated a small but successful prototype children's museum at the Primary Care Center for the UVa Hospital. In 1983, the League awarded the seed funding to the Children's Museum Coalition Committee to help with research and the build exhibits. This committee is now Virginia Discovery Museum, for which the League has , over the years, provided volunteers for the Museum and had a representative on the Museum's Board of Directors.

In the 1970s, the League published the first of two cookbooks "With Our Compliments" and sponsored the Birdwood Designer Showhouse and kitchen tour.

In the 1980s, the League published their second cookbook 'Best of the Bushel', held benefit polo matches, and began the Holiday House Tour, which enjoyed a successful 10-year run. 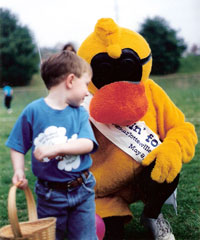 As the League matured, members began to assume a higher profile in the community through not only their activities but advocacy efforts as well. Members talked about teen-age pregnancy prevention with Planned Parenthood, talked about alcohol abuse in women and initiated the Women to Women alcohol education program, and they kept in touch with local elected officials to keep them informed as to what the League thought was important in the community. The League took on domestic violence by working with the Shelter for Help in Emergency to establish a long-term solution for the need for transitional housing, and they began their partnership with Habitat for Humanity of Greater Charlottesville through their WomenBuild program.