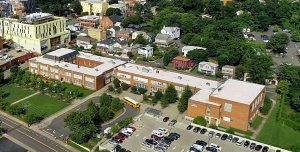 The Jefferson School was built as an African American public school in 1926 to serve the Black population of the city and beyond. [1]

Now listed on the National Register of Historic Places, the school is the site of the Carver Recreation Center and the other tenants of the Jefferson School City Center as part of a $17 million project, $5.8 million of which was funded through city tax dollars.[3]

The school was first used as a high school for black students until 1951, when it was converted to an elementary school. [3] The closed in 1964 following an end to policies that required Black and white students be kept separate. When Charlottesville schools reopened, the school again became an elementary school before closing its doors for good in 2002. [3]

On August 1, 2011, the Jefferson School Community Partnership signed paperwork for a $12 million loan.[4] The city of Charlottesville loaned the project $5.7 million through the Charlottesville Economic Development Authority.

On the south end of the building, Carver Rec hosts a gymnasium with roller skating and volleyball programs, a kitchen, craft room, dance room, gymnastics room and "kids zone". Carver is one of several recreation centers run by the Department of Parks and Recreation.

On April 18, 2011, City Council voted to approve a request to have the school listed as an individually protected property. That requires any plans to modify the structure to come before the Board of Architectural Review and the City Council.[3]

There is a Virginia Department of Historic Resources Historical Highway Marker on-site (Q-30):[9]

The name Jefferson School has a long association with African American education in Charlottesville. It was first used in the 1860s in a Freedmen's Bureau school and then for a public grade school by 1894. Jefferson High School opened here in 1926 as the city's first high school for blacks, an early accredited black high school in Virginia. The facility became Jefferson Elementary School in 1951. In 1958, some current and former Jefferson students requested transfers to two white schools. The state closed the two white schools. Their reopening in 1959 began the process of desegregation in Charlottesville. Jefferson School housed many different educational programs after integrating in 1965. Department of Historic Resources, 2003.

The site of the “New Jefferson School”, today known as Jefferson School and Carver Recreation Center, is located at 233 Fourth Street, NW in Charlottesville, Virginia, and sits on a lot that runs the length of an entire city block. The large two-story brick building was constructed in four sections with the earliest in 1926 and additions in 1938-39, 1958, and 1959. The oldest portion of the school was designed by Norfolk–based architect Charles Calrow and forms the façade of the building facing Commerce Street. The 1938-1939, two-story, rear addition, containing primarily classrooms, was designed by architects William E. Stainback and Louis A. Brown, Jr. and was partially funded by the Public Works Administration (PWA). Two more additions were made to the north end of the building in the late 1950s, both designed by Baker, Heyward and Llorens Architects of Charlottesville. The 1958 portion contains primarily additional classroom space, and the 1959 portion, now known as the Carver Recreation Center, includes the large gymnasium that is the present northern terminus of the building. The 3.971-acre site on which Jefferson School and Carver Recreation Center is located includes a playground and grassy area northeast of the school as well as a large parking lot along the entire east side of the building.

The first African-American school to stand on the property was located east of the present building, on land which has become part of the current parking lot. It was a two-and-one-half-story brick structure constructed in 1894 and known as the Jefferson Colored Graded/Elementary School and was demolished in 1959. A section of a low brick wall, which may be part of the 1894 original school building, is located at the Fourth Street parking lot entrance of Jefferson School. Archaeological investigations have not been conducted on the site but are planned for the near future.

The earliest portion of the current Jefferson School was constructed in 1926, after members of the community had petitioned the Superintendent and the City School Board for a high school for the city’s colored youth. The new school was built adjacent to the older building, which remained on the site until 1959, when it was demolished.

The architectural history of Jefferson School and Carver Recreation Center spans more than three decades. The school is a remarkably well-preserved example of the evolution of typical public school designs of this era. Much of the building’s interior woodwork, flooring, and wall treatments as well as the windows and exterior detailing from the various building periods are still intact. The earliest portion features a U-shaped corridor on the main level with classrooms radiating off one side, as well as a central auditorium. The 1938-1939 addition created an enclosed open-air courtyard at the rear of the original building as well as providing additional classroom space and a library. While the 1958 addition provided mainly classrooms, the 1959 addition provided a large gymnasium and athletic facilities on the upper level for Jefferson School and an auditorium and rooms for Carver Recreation Center on the lower level. Following the full integration of educational facilities in Charlottesville in 1965, Jefferson School continued to accommodate educational activities as well as to house various city offices. The Carver Recreation Center remains in the building, now occupying the upper and lower floors, and continues to serve the greater Charlottesville community.