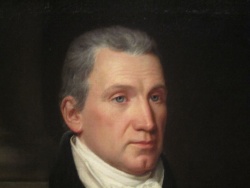 James Monroe lived in Charlottesville after serving in the Revolutionary War. Monroe was the fifth president of the United States of America (1817–1825).[1]

In 2016, the nonprofit organization that runs his estate changed the name back to Highland, its name when Monroe lived there. A later owner had renamed it to Ash Lawn-Highland. Monroe lived there from 1799 to 1823.[2]> Monroe sold the house as he exited the presidency.

Friends with Thomas Jefferson, Monroe moved to Charlottesville to study law under Jefferson (1780 to 1783). Following his presidency, Monroe lived at Monroe Hill, which is now Brown College at Monroe Hill, on the grounds of the University of Virginia.[3]

In 1973, the Jefferson Cable Corporation filmed a brief documentary narrated by Bernard Chamberlain describing the history of James Monroe.

In 1974, Bernard Chamberlain hosted Jane Ikenberry in this conversation about Ash Lawn-Highland, the home of James Monroe, the 5th President of the United States.