JAUNT was organized in 1975 under the name Jefferson Area United Transportation. It has served 8 million passengers. [1]

JAUNT is owned by the local governments it serves and uses federal, state and local funding to supplement fares and agency payments. In 2010, it began providing rides from Culpeper to Charlottesville in collaboration with the Foothills Area Mobility system[2].

JAUNT launched a commuter route from Hollymead Town Center to the University of Virginia and Downtown Transit Center in 2016 called the Route 29 Express. The agency funded te service in part through a proffer for a section of the center known as A-1. However, developer Wendell Wood is asking that the proffer be amended. [3]

JAUNT partnered with the UVA Foundation in the summer of 2018 to plan for a free commuter route connecting Central Grounds with the UVA Research Park. [5] 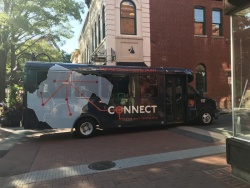 Service between Crozet and Charlottesville began on August 5, 2019. [6]

Fluvanna County experienced significant budget shortfalls for the 2013 fiscal year, resulting in complete cuts to funding for JAUNT and end of service in Fluvanna July 1 2012. In 2011 JAUNT provided about 21,000 trips to Fluvanna residents and operated an afterschool activity shuttle bus service for county schools.[7]

JAUNT is working with Perrone Robotics on an autonomous shuttle that will serve the Crozet area. The project is called TONY, short for To Navigate You. [9]