Indigenous people (also referred to as Native or Native American, American Indian, or Indian) were the sole residents of what is now Virginia until the arrival of European colonists in the fifteenth century. Pre-Clovis evidence was found in Sussex County of an indigenous presence as early as 18-20,000 years ago.[1] Until around 8,000 BCE, residents of Virginia would largely been hunters and gatherers. Between 900 and 1650 CE, these groups consolidated and settled in semi-permanent cities and towns, with domesticated animals and agriculture as well as complex and diverse religious and governmental systems.[1] 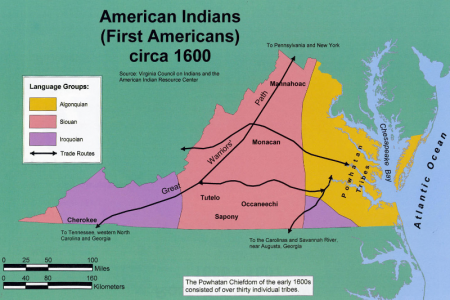 Map of general territories for each Virginian indigenous language group[2]

By the start of the seventeenth century, indigenous peoples in what is now Virginia fell into three main language groups: Algonquin, Siouan, and Iroquoian. These language groups covered over 800 languages and hundreds of tribal groups.[1]

By first contact, six Algonquin-speaking groups had consolidated into a paramount chiefdom named Tsenacomoco.[1] Tsenacomoco was loosely bordered by the Powhatan River (since renamed the James River) and the Potomac River.[1] In the mid sixteenth century until 1618, the paramount chief was Chief Powhatan, father of Pocahontas. Powhatan expanded Tsenacomoco from six tribes to around thirty. Population estimates range from 13,000 to 22,000, possibly higher.[1]

The original six chiefdoms were the Powhatan, Youghtanund, Mattaponi, Pamunkey, Arrohateck, and Appamattuck.[1] Tsenacomoco grew to include additional chiefdoms and tribes, including the following: 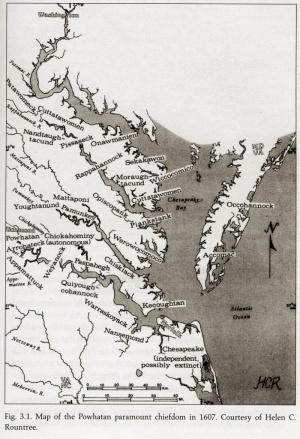 Map of some of the tribes within the Tsenacomoco paramount chiefdom (Powhatan) and surrounding territory, circa 1607[1]

The Chickahominy people lived on the Chickahominy River, in the center of Tsenacomoco. They were independent of Powhatan’s rule. Others, including the Patawomeck and Accomac, lived on Tsenacomoco’s outskirts, alternately paying Powhatan tribute and defying him.[1]

The Siouan people lived in the Piedmont region of Virginia and the Blue Ridge Mountains. Most tribes in the region were part of the Monacan Confederation.[1][3] In 1607, the Monacan lived above the falls of the James River and were traditional enemies of Algonquian groups.[3] At the time of first contact, the Virginia Siouans numbered more than 10,000 people.[4]

The Monacan Nation, the westernmost Virginia tribe, has federal and state recognition. Bear Mountain in Amherst County has been the home of the Monacan people for more than 10,000 years. In the present day, the Nation has over 2,300 registered members.[4]

In 1607, the James River Monacan (along with their Mannahoac allies on the Rappahannock River) controlled the area between the Fall Line in Richmond and the Blue Ridge Mountains.[4] At that time, the Monacans traded with the Powhatans to the east and the Iroquois to the north. They farmed corn, beans and squash, sunflowers, fruit trees, wild grapes and nuts, supplemented with deer, elk and small game that they hunted. The Monacans also mined copper. The Monacan ancestors lived in villages with palisaded walls, and their homes were dome-shaped structures of bark and reed mats.[4]

The Monacans also buried their dead in mounds, a tradition that differentiates them from neighboring Indian nations.[4] Throughout the piedmont and mountain regions, thirteen mounds have been identified and many excavated, including the The Monacan people buried the remains of their dead in sacred earthen mounds.[5] One of those sites is believed to be located north of Charlottesville, somewhere in the Seven Bends of the Rivanna.[3][5] It is known today as the Jefferson’s Mound Archaeological Site, as Thomas Jefferson led an excavation after observing Monacans conduct a ceremony there.[5]

The Monacans gradually moved westward and away from the advancing settlers between 1607 and 1720.[4] Some stayed for several years at Fort Christanna, in Brunswick County. These people eventually moved into Pennsylvania and finally to Canada, where they were adopted by the Cayugas, a division of the Iroquois Confederacy. They were joined by Tuscaroras from North Carolina, whose population was decimated after English attacks.[4] Some of the Monacan people stayed in their ancestral home in Virginia, a place that became known as Amherst County. Other members of their confederacy, such as Saponis, Occaneechis, and Tutelos, joined these remaining Monacans, and the Monacan people adopted the few Tuscaroras who chose to remain in Virginia.[4]

By 1807, a settlement of Monacan ancestors on Johns Creek had been named “Oronoco,” after a local type of dark-leaf tobacco grown in the area. It has been suggested that the Native people taught their new neighbors how to grow this tobacco, majorly contributing to the success of what would become one of the greatest tobacco markets in the world at that time, the City of Lynchburg. The settlement at Oronoco was listed as a post town on a map of the county, and from this settlement grew the modern Monacan Nation.[4]

In 1860, the Amherst County Clerk's Office recorded, among the names of free persons of color, the Monacan surnames of Beverly, Branham, Johns, Pinn and Terry.[4]

Monasukapanough was a Monacan town located on the Rivanna River, about five miles north of present-day downtown Charlottesville. The surrounding area, including what is now Albemarle County, was Monacan land.[3][6]

The Iroquoian people lived along the fall line south of present-day Richmond and in far southeastern and southwestern Virginia.[1] Little is known about the Iroquois this far south, but it is likely that they were once part of the Iroquois Confederacy, Haudenosaunee (also known as the six nations) and then isolated by territorial encroachment by other tribes. In 1820, Professor John Wood from the College of William and Mary visited the Nottoway community in Southampton County and compiled a word list that was identified as Iroquoian by Wood, Thomas Jefferson, and a French linguist.[1]

The Commonwealth of Virginia recognizes eleven indigenous tribes, chiefdoms, and nations. Eight of these were once part of the Powhatan Paramount Chiefdom:[7]

The Cheroenhaka (Nottoway) tribe, the Nottoway tribe (distinct from the Cheroenhaka), and the Monacan Nation were independent of the Powhatan Paramount Chiefdom.[7]

The bolded tribes, chiefdoms, and nations are recognized by the United States federal government.