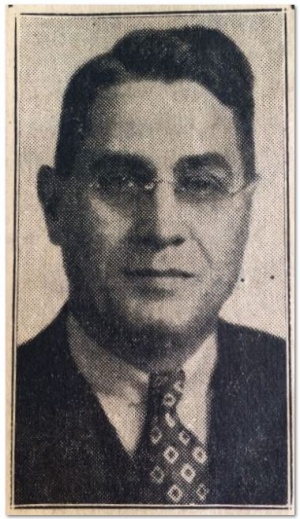 Before entering the insurance business in 1924, he was the first manager of the University branch of Virginia National Bank. He was deacon, choir member, Sunday school superintendent and 60-year member of First Baptist Church. He was survived by his wife, Mrs. Betty Davis Via; a brother, Warren W. Via of Chapel Hill, N.C.; two sisters, Mrs. C. Shelton Barr of Charlottesville and Mrs. Mary V. Burk of Greenbelt, Md. Arrangements were completed by Hill and Irving Funeral Home. The family requested donations be made in lieu of flowers to the Rescue Squad or a favorite charity.

Guy, a native of Charlottesville, son of the late Anderson W. Via and Lena (Harris) Via attended the public schools of the city and after graduating from Lane High school was a student for one year in the law school at the University of Virginia. His first position was with the Peoples National Bank, as a runner. After a short time in the mercantile business, he returned to the employ of the Peoples Bank as the first manager of its University branch. Mr. Via left bank to go into the general insurance business as a partner of Charles G. Maphis, of the Maphis & Twyman Insurance Agency, shortly after the death of J. Taylor Twyman. This firm was combined with the City Mortgage & Insurance Company in 1929, and Mr. Via was one of the directors of this company. He was the second president of the Young Men's Business club, in 1922, and was elected president of the Kiwanis Club in 1936. He was a charter member of the Municipal Band, and had been president of that organization for five years. Mr. Via was a Mason, member of local lodges, and of Acca Temple Shrine, Richmond, and member of the Shrine Bank. He was a deacon in the First Baptist Church and superintendent of the adult department of the Sunday School. He was a member of the Farmington Country Club. Charlottesville Personalities Daily Progress, April 1, 1938 [1]