Frank Dabney Peregoy (April 10, 1916-June 14, 1944), born in Nelson County and later lived with his family in the Proffit area of Albemarle County. While serving in World War II, Peregoy was a member of one of the area’s most famous World War II-era fighting commands: “The Monticello Guard,” Company K, 116th Infantry, 29th Division. On June 17, 1942, Tech. Sgt. Peregoy was awarded the Soldier’s Medal - America’s highest award for non-combat gallantry, for saving the life of a fellow soldier. Peregoy was awarded the Medal of Honor posthumously on June 4, 1945, for single-handedly attacking and defeating a strongly held enemy position at Grandecamp, France, on D-Day plus two, killing 8 enemy soldiers and capturing 35 including machine gunners. Tech. Sgt. Frank Dabney Peregoy is one of only two Central Virginia World War II recipients of the Medal of Honor.

Posthumously awarded the Medal of Honor for his service during World War II, Peregoy was honored locally when the U.S. Army Reserve Center was named for him when it opened in 1960. [1] [2]

On 8 June 1944, the 3d Battalion of the 116th Infantry was advancing on the strongly held German defenses at Grandcampe, France, when the leading elements were suddenly halted by decimating machine-gun fire from a firmly entrenched enemy force on the high ground overlooking the town. After numerous attempts to neutralize the enemy position by supporting artillery and tank fire had proved ineffective, T/Sgt. Peregory, on his own initiative, advanced up the hill under withering fire and worked his way to the crest, where he discovered an entrenchment leading to the main fortifications 200 yards away. Without hesitating, he leaped into the trench and moved toward the emplacement. Encountering a squad of enemy riflemen, he fearlessly attacked them with hand grenades and bayonet, killed eight, and forced three to surrender. Continuing along the trench, he singlehandedly forced the surrender of 32 more riflemen, captured the machine gunners, and opened the way for the leading elements of the battalion to advance and secure its objective. The extraordinary gallantry and aggressiveness displayed by T/Sgt. Peregory are exemplary of the highest traditions of the Armed Forces.[3]

Peregoy was born on April 10, 1916 to Susie E. Allen and James E. Peregoy in Nelson County and raised in Albemarle County. He enlisted in the Monticello Guard in 1931 and entered active Army service on February 3, 1941 as part of the 116th Infantry.

Peregoy was a technical sergeant who was killed serving in World War II. Six days before he had killed eight Axis soldiers and forced the surrender of several dozen more.

In April of 2016, the Albemarle County Board of Supervisors declared April 10, 2016 as "Tech. Sgt. Frank Peregoy Day," and support a citizen campaign to correct the misinformation regarding the spelling of his last name.

The resolution cites the spelling of his last name as "Peregoy" and noted that Peregoy’s name is misspelled as “P-e-r-e-g-o-r-y” on numerous historical markers, buildings, and, sadly, on his gravestone in the U.S. cemetery in St.-Laurent-Sur-Mer, France;[4]His birth year is also typically given erroneously as 1915, possibly because he originally lied about his age at enlistment. According to his birth certificate, his last name was spelled "Peregoy" and his birth year as 1916. 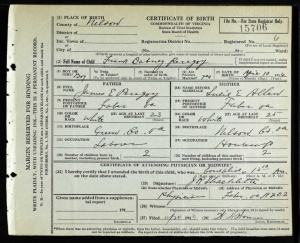 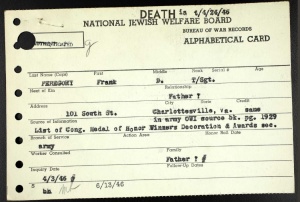