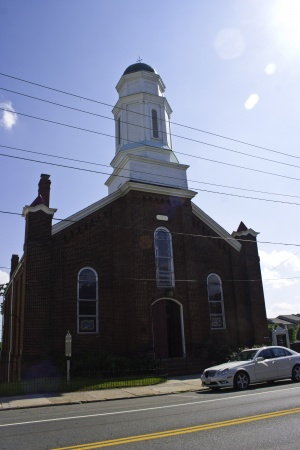 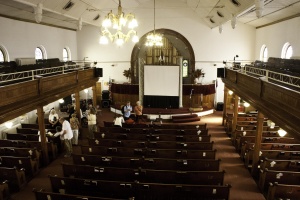 Picture taken from the balcony of the First Baptist Church.

The building is within the Fifeville and Tonsler Neighborhoods Historic District. [2] The church was originally built between 1826 and 1828 by Gen. John H. Cocke. The University of Virginia’s Board of Visitors originally built the Mudwall building— named for its hue from the Albemarle clay— as temperance housing for students.[1] During the Civil War, the building was the triage site for the Confederate Charlottesville General Hospital, due to its proximity to the railroad.

Prior to the Civil War, Black people from Charlottesville-- enslaved and free-- worshipped under segregated conditions; African American Baptists in Charlottesville attended services in the balcony of the White Charlottesville Baptist Church (later known as the First Baptist Church on Park Street).[1] Two months after President Lincoln signed the Emancipation Proclamation, about 800 African-American churchgoers submitted paperwork to the City of Charlottesville to form their own congregation. On July 8, 1864, the church became a separate entity, but continued to hold services at the parent church until on or about August 20, 1864 when the congregation purchased the old Delevan Hotel at 632 West Main Street.[1]

The Delevan building was condemned and razed in 1876, the congregation held services in the Presbyterian and Episcopal churches while they erected a new building on the Delevan site. On November 7, 1877, the cornerstone of the new church was laid by the Jefferson Lodge, a Charlottesville association of African American Freemasons. The new church was dedicated on January 2, 1884 and renamed the First Colored Baptist Church of Charlottesville on February 17, 1884.[3] 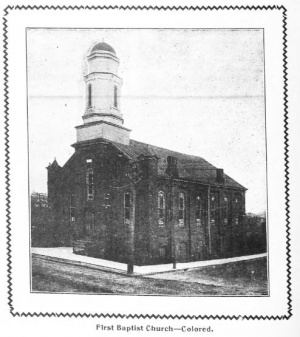 On May 29, 2012, First Baptist opened its doors to the community as part of the city's 250th celebration. The program included a brief presentation on notable First Baptist attendees and their relationship to the community (John West, Benjamin Tonsler, and Rebecca McGinness), hymns sung by both young and old current church members, and a reading from Rebecca Shelton's diary from 1863.